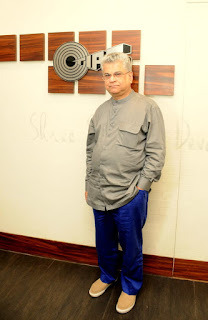 Music Czar N the joint owner of Tips Industries Limited Kumar Taurani is one of the major corporate houses in the field of music and films, speaking to our correspondent Taurani seem to be Gung-ho about his digital plans majorly concerned about the piracy control has an piece of advice to authority and internet giant Google to mark some changes in the IPS protocol making it ease into generating more revenues to already in an dire condition which the Music Giants foresee.

Mega plans in the offing to be part of the of new world of web series is the major focus the much needed action is to generate the foothold  into this new era draws the interest of the Taurani brothers also plans are  afoot  to ties with some well-known Director’s to make thought-provoking movies in the coming season also to push the latest installment of Race 4 is on the platter.

"In everything we do, we are committed to artistry, innovation and entrepreneurship" says Mr. Kumar Taurani who realised the potential of the internet and formulated a vigorous online plan of action to transform his company.

Emerging as one of the leading labels Tips Music has managed to rule the Bollywood space since the late 80's with its growing acquisitions and venture into home productions. Today, Tips Music YouTube channel has crossed the 9 million subscriber mark on YouTube,  with its audience base spread across India and other countries. “This has happened because we never compromised on our content".  Well, looks like Tips Music is instrumental in bringing retro music on digital platform & seems like they will be further spreading their wings in the digital space and there is definitely no stopping

Post the success of Race 3, Tips Music is riding high on the success of "Tera Fitoor", "Dil Meri Na Sune" from the film "Genius" has come from the house of Tips Music which makes the song immensely loveable & memorable to be played & watched on a repeat mode.

The forte of Tips Music, apart from selecting the right kind of music, lies in music promotion. Tips has always been powered by innovation. Their marketing approach has been a stupendous success winning them great acclaim. The ability of the company to adapt itself to changing market trends has been proved extremely relevant in its success. Tips Music has been the trendsetter as it has always stayed a step ahead of the industry. Tries to catch up.

After changing the face of the Indian Music Industry, this corporate genius has now spread its wings over the creative skies of Indian filmdom. Looks like Tips Music is on its way to lead the global music scenes.

Posted by orientpublication at Saturday, September 08, 2018
Email ThisBlogThis!Share to TwitterShare to FacebookShare to Pinterest