There is almost an equal usage between pre-installed and downloaded apps; the Indian consumers use apps that they find most useful and relevant

September 20, 2018: Consumer Education and Research Centre, a leading not-for-profit consumer organization, today, in partnership with Chase India, a public policy consultancy firm, released the report “Understanding consumer choice towards mobile applications”. The report is based on a consumer survey, conducted by Nielsen, designed to understand the application of the Indian consumers. The survey also helped in understanding the reasons driving these consumer preferences.

The mobile app usage in India has outpaced the global growth. India has the second-largest number of mobile app downloads in the world, overtaking the US and trailing only China. This report is based on a consumer survey designed to understand the app preference of Indian consumers and the reasons driving these preferences. The report captures consumer preference based on most popular apps identified by Nielsen.

The primary research was done in two parts. The first part constituted collation and analysis of data from Neilsen’s smartphone panel ‘On-Device Meters’(ODMs) of 8000 connected smartphone users spread across India. In the second part of primary research, a quantitative survey carried out by Nielsen through interviews conducted with 3776 respondents from urban and rural centers from 20 states.

The key findings of the report are:

The consumers exercise informed choice when selecting the mobile application. Indian consumers frequently download competing apps and, multi-home based upon the quality of the apps and services.

Consumers often use multiple applications for the same activity leading to significant degree of overlap in categories like browsers (50%), online retail (42%), messaging (48%) and cab aggregators (28%)

In terms of preferences, even when presented with both options, there is almost an equal distribution between pre-installed and downloaded apps, signifying that the Indian consumers use apps that they find most useful and relevant.

There is high awareness and usage of third party apps. Consumers download these apps from different app stores, web or even sideload them. 86% users stated that peer reviews and word of mouth are key influencers for choosing an application

The openness of the Android ecosystem has created an extensive and competitive mobile app ecosystem that provides a plethora of choices for the Indian consumers.

Snapshot of most popular apps and consumer preferences: 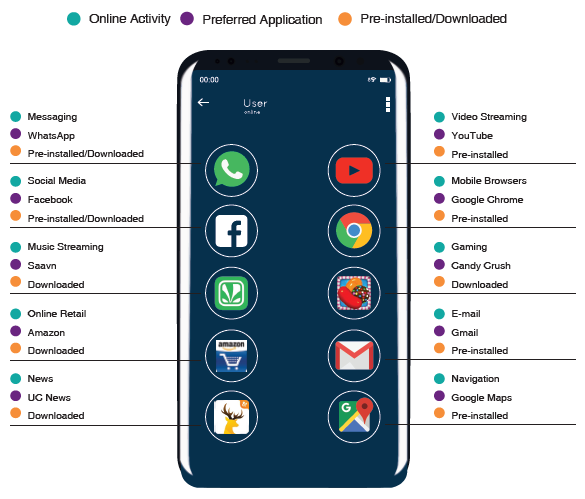 Rashmi Goyal, Sr. Manager - Advocacy, CERC added, “The consumers today are much more aware about their digital footprint and demand greater control over an application’s functionality and access. However, a large user base , especially  in the semi-urban and rural areas still are unable to protect  their concerns while installing or using apps of their choice.  It is the need of the hour that device manufacturers now take responsibility of safeguarding consumers and saving them resources by providing preinstalled apps of choice with fair terms and conditions.  App makers and service providers should further ensure that unnecessary and irrelevant information is not asked from the user while installing or using any app and access to consumer data should be fair and well documented. Consumers should also be made aware of the controls provided to them for accessing a given service without compromising their privacy.”

Kaushal Mahan, Lead-Technology Practice, Chase India further added, “The mobile app market in India is very competitive. As a result, the Indian consumers are can choose between multiple apps for the same function or service. At the same time, as the internet penetration continues to deepen in India and new users begin to us mobile applications, it is imperative to educate the new users about tools that they can use to protect their data in the digital ecosystem.”

Posted by orientpublication at Friday, September 21, 2018
Email ThisBlogThis!Share to TwitterShare to FacebookShare to Pinterest