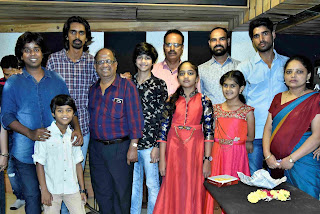 Directed by Kailash Pawar and produced by Dasharath Rajendra Yadav, Rekha Surendra Jagtap, Sampatrao Patil and Shantaram Bhondave under the banner Prajakta Enterprises, Salman Society runs with the tagline ‘Padhega India To Badhega India’ and focuses on the issue of child education.

The song Party Danaali was recently recorded in Mumbai in the presence of the producers and the cast. Sources suggest that the song composed by Shreyas Angane and crooned by Nagesh Morvekar (Gavthi fame) has come out well and will be one of the most popular chartbusters of the year.

The makers have planned an extensive shoot schedule of Salman Society in Mumbai. The movie which is currently on floors will be releasing in December this year.
Posted by orientpublication at Monday, July 02, 2018
Email ThisBlogThis!Share to TwitterShare to FacebookShare to Pinterest