NASSCOM Foundation Reports a Rise in the Industry CSR spending 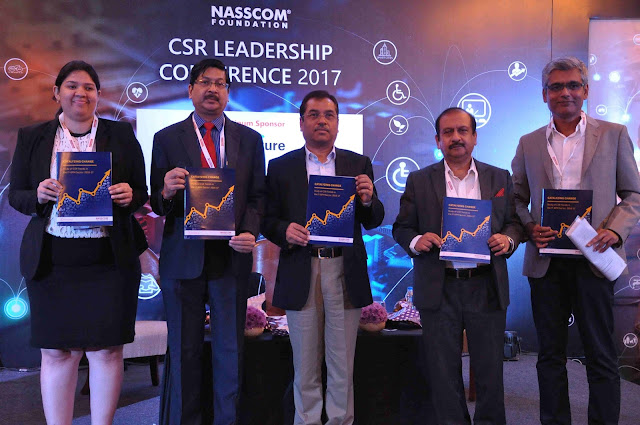 Bengaluru, 29th November, 2017 – NASSCOM Foundation at its flagship event, The CSR Leadership Conference (CLC), announced that the Industry had widely accepted the 2% CSR rule with a trend of more companies coming out openly to declare 100%+ utilization of their CSR money for 2016-17.
This year the CLC went beyond discussing basic intervention areas, to talk about new developments, innovative tools and disruptive ways of making the ecosystem better, more impactful and efficient. In this process, the CLC will deep dive into Re-Calibrating Employability through CSR, Social Impact Investing, Leveraging Big Data for Impact, Unlocking the Value of Corporate Sustainability in the form of panel discussions, fireside chats and impact talks.
NASSCOM Foundation in partnership with Goodera released the report: ‘Catalyzing Change’. Some key highlights from the report:


Shrikant Sinha, CEO, NASSCOM Foundation, said, “The IT BPM Industry has been at the forefront of social development initiatives and it is heartening to see the industry emerging as one of the most efficient and innovative adopters of corporate social responsibility. Technology continues to prove a force multiplier in social impact with more than half of the companies that spent 100% or more of their CSR funds, claiming efficient use of technology to deliver innovative CSR programs aligned to the Goverment agenda.”
The event saw over 400 CEOs, CXOs, CSR Heads, HR Heads of the top most companies from across various industries with the NGO Leads, Government officials, thought leaders, Tech4Good champions, social innovators come under one roof to discuss and create collaborative and innovative ways of fulfilling the most important Social Development Goals for India.
The CSR Leadership Conference also had on showcase, innovations from various social startups and NGOs like Sohum Innovation Lab, Neurosynaptic, EYE-D, Bleetech Innovations, Sankalptaru, Foundation for Ecological Securities, Headstreams, CFBT among others.
Through its unique NGO impact wall and Networking spaces, the CSR Leadership Conference also provided an opportunity to 100+ participating NGOs to showcase their work to the corporates and connect at a programmatic level.

Posted by orientpublication at Thursday, November 30, 2017