Music Launch of ‘Dr. Tatya Lahane | Angaar… Power Is Within’ 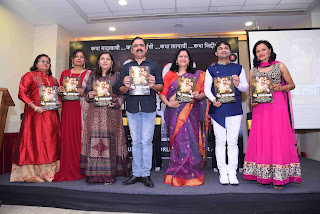 The movie ‘Dr. Tatya Lahane | Angaar... Power Is Within,’ which is a tribute to Padmashree Dr. Tatya Lahane's career and his life struggle is increasingly gaining popularity across Maharashtra. Recently one of the melodious songs from this movie was released during the movie’s music launch ceremony at City Light Banquets, Mahim (West). Those present during the event were lead filmstars Makarand Anaspure, Alka Kubal and Dr. Nishigandha Wad along with noted singer Sadhana Sargam, Producer & Director Virag MadhuMalati Wankhade, Assistant Producer Vandana Wankhade, Presenter Reena Agrawal and Social Worker Chandrakumar Jajodia. During this event, Sadhana Sargam and Virag sung the song from the movie ‘Kaalokhala bhedun taku, jeevanala ujalun taku…’ which has entered the Guinness Book of World Records through Relay Singing.
The promotion of this film is being done in towns and villages throughout Maharashtra and is gaining a lot of positive response. Many schools and colleges have already made an advance group booking for their students. Lions club, Rotary Club & other social organisations also have demanded a group booking for poor students and ashram schools to ensure that they benefit from the movie.
‘Dr. Tatya Lahane | Angaar... Power Is Within’ is a movie produced by Virag MadhuMalati Entertainment and it will be released in theatres on January 12, 2018. This movie is about Dr. Tatya Lahane’s life and portrays how he completed his medical education and created his own path inspite of various problems and hardships. The movie also throws light on the kidney donation done by his mother which saved his life thereby giving an important message of organ donation to the community. The incidents of Dr. Lahane’s efforts, hardships, conflicts and his mother’s support are an inspiration for others. This biopic of Dr. Tatya Lahane is going to be a guide for today's youth. After watching the special preview of the film, many  believed that the film will be an inspiration for the students & will give new dimension to every community of the society.
This film has entered the Guinness Book of World Records through Relay Singing, and the song ‘Kaalokhala bhedun taku, jeevanala ujalun taku…’ is sung by Sadhana Sargam and Virag himself. Another song from the film, ‘Ka re majhya mana, chhaltos tu mala’ which shows many ups and downs in the life of Dr. Tatya Lahane, is sung by Ketki Mategaonkar and Virag. Also, his childhood hardships and struggles have been highlighted in the song ‘Zaale ghaav jari kaalja tari.. hurhur na aata ya jiva’. The music of the film has been composed by ‘Ek Hindustani’ and he has not revealed his identity while saluting the work done by Dr. Lahane, through his music. The film's background is composed by Sameer – Sachin. Lyrics of the songs have been penned down by Virag Madhumalati & Rahul salve.
The lead role of Dr. Tatya Lahane has been portrayed by Actor Makarand Anaspure in this film, Alka Kubal is in the role of his mother Anjana Bai, Dr. Nishigandha Wad has played the role of Dr. Ragini Parekh while Bharat Ganeshpure and Ramesh Deo are seen in special roles in the film.

Posted by orientpublication at Monday, December 04, 2017