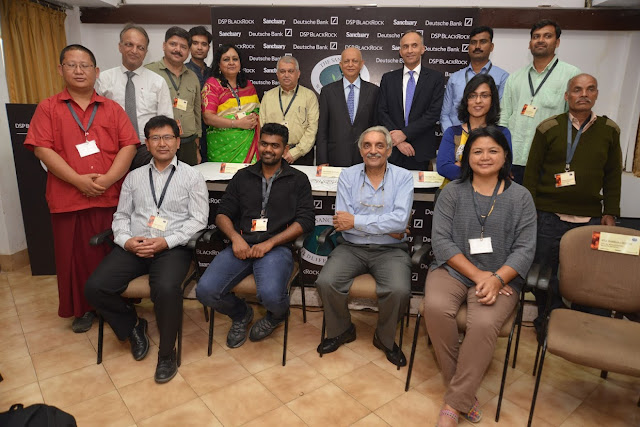 Mumbai, December 1, 2016: Sanctuary Asia, supported by DSP Blackrock and Deutsche Bank, India announced the winners of the 17th Sanctuary Wildlife Awards at a press conference on Thursday.
The award categories include the prestigious Lifetime Service Award, five Wildlife Service Awards, three Young Naturalist Awards, one joint Green Teacher Award, one Wind Under the Wings Awards and four Special Maharashtra Wildlife Service Awards. The winners will be felicitated at the 17th Sanctuary Wildlife Awards ceremony at the National Centre for the Performing Arts (NCPA) in Mumbai on December 2, 2016. List of awardees enclosed

Bittu Sahgal, Founder and Editor, Sanctuary Asia said, “Since the year 2000, Sanctuary has celebrated extraordinary men and women who have dedicated their lives to safeguard the future of wild nature… all our lives actually. Largely unnoticed in the larger scheme of national development, these Earth Heroes’ hearts beat for nature and they do what they do from inner conviction, undeterred by threats, obstacles, or distractions. These men and women are nation-builders, planet-protectors and were nominated by Sanctuary Asia readers and supporters from across the country. Sanctuary is extremely grateful to our sponsors, DSP BlackRock and Deutsche Bank for their unstinting support, which goes far beyond mere financial assistance.”
Hemendra Kothari, Chairman, DSP BlackRock, said, “For us at DSP BlackRock, supporting tigers and Sanctuary comes very naturally. We also believe that just like we honour the members of our armed forces, everyone should also respect and honour the brave individuals who battle against all odds to keep India’s wild landscapes safe for future generations. It should be clear to economists, bankers and others that economic growth without ecological security will not only adversely impact our businesses, but will threaten the water and food security of our great nation. Over the years we have been proud to stand shoulder by shoulder with Sanctuary and the Earth Heroes we are honouring. They are nation builders and future generations will recognise them as the founders of a new India, which rises not merely on its economic but also on its ecologic strength.”

Ravneet Gill, CEO – India, Deutsche Bank, said, “Deutsche Bank is committed to supporting sustainable growth, which is built on a thriving ecological foundation. Our coming together with Sanctuary to honour wildlife heroes is an expression of this resolve, as is the support to the Community Nature Conservancy programme in Umred-Karhandla, which seeks to make local communities the primary beneficiaries of renewed biodiversity. We remain determined to continue deepening and strengthening the links between people, the economy and ecology.”

Posted by orientpublication at Saturday, December 03, 2016
Email ThisBlogThis!Share to TwitterShare to FacebookShare to Pinterest