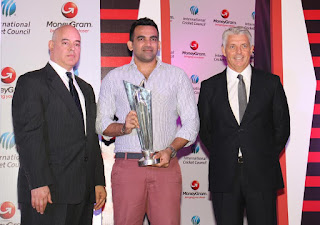 Continues to actively engage with over 30 million South Asians and cricket fans around the globe
MUMBAI (January 11, 2016) – MoneyGram (NASDAQ: MGI) has extended its sponsorship agreement with the International Cricket Council (ICC) for an additional eight years in an agreement that will see the global provider of money transfer and payment services sponsor [all] tournaments sanctioned by cricket’s governing body and other associated events until the end of 2023.
The new agreement marks an extension of MoneyGram’s initial five-year relationship with the ICC that included sponsorship of the 2011 and 2015 World Cup tournaments.
“Cricket touches many lives and it’s truly exciting to be a part of this sport and witnessing its potential to inspire and transform lives firsthand,” said Juan Agualimpia, MoneyGram’s executive vice president and chief marketing officer. “At the end of the day, MoneyGram brings people closer just as the sport brings people closer across geographies. Our association with the ICC has certainly helped establish MoneyGram as a preferred brand for South Asians around the world and we are delighted to extend this agreement for another eight years.”
“I am delighted that MoneyGram has decided to continue to support cricket by extending its relationship with the ICC,” said ICC chief executive David Richardson. “The extension says much about the value of our events and that we continue to retain sponsors of the caliber of MoneyGram and at the same time attract new ones. The T20 format has brought in a lot of women viewership and we hope that women’s cricket too finds its way around the world. Sponsors are the lifeline for any sport and on behalf of the ICC, I thank MoneyGram for their continued support and patronage of cricket.”


As momentum builds to the ICC World Twenty20 event in India, MoneyGram will launch consumer activation programs in more than 100 cities and reach out to cricket fans around the world. Cricket enthusiasts will not only get a chance to witness the game but also get a chance to see the trophy and meet its stars up close.
India, which has the largest base of cricket fans in the world, is also the world’s largest remittance receiving country with an inflow of $70 billion annually, according to the World Bank.
MoneyGram announced its sponsorship agreement during a press conference in Mumbai today, which was attended by ICC Chief Executive David Richardson, and international Indian cricket star Zaheer Khan.
#moneygramnews


About MoneyGram Inc.
MoneyGram is a global provider of innovative money transfer and payment services and is recognized worldwide as a financial connection to friends and family. Whether online, or through a mobile device, at a kiosk or in a local store, we connect consumers any way that is convenient for them. We also provide bill payment services, issue money orders and process official checks in select markets. More information about MoneyGram International, Inc. is available at moneygram.com.


Posted by orientpublication at Tuesday, January 12, 2016
Email ThisBlogThis!Share to TwitterShare to FacebookShare to Pinterest