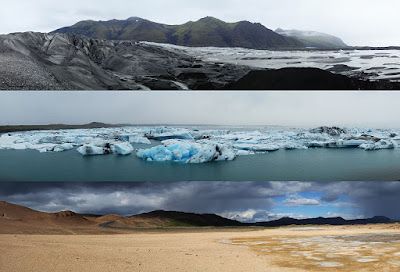 If the thought of Iceland conjures up visions of a dull, frozen expanse, think again.  Hot springs, colourful skies, delightful contrasts and lush green valleys punctuated by milky waterfalls are characteristic to Iceland.
You’re sure to catch a glimpse of some of Iceland’s wonders as it makes it to the big league of Bollywood alongside Sharukh Khan and Kajol in Dilwale in the song Gerua. Director Rohit Shetty was reportedly looking for a dreamscape to lend further romance to the song and he chose (with prodding from King Khan himself) Iceland based on its incredibly majestic appearance. Gerua is already making headlines, breaking records and going down in history weeks before the movie is even released! Besides being celebrated for showcasing the amazing on-screen chemistry between Sharukh Khan and Kajol, Gerua has earned fame as the most expensive Bollywood number to be shot overseas. Shetty is evidently certain that the investment was more than justified – he has been quoted saying, “Iceland was the perfect location for Gerua where every locale is untouched and does justice to not only the song but to SRK and Kajol as well.” Apparently cost was hardly a factor – SRK and Rohit Shetty wanted it to be simply mind-blowing.
However, there are more wonders to this Nordic superstar than the astounding black and blue landscape that forms the dramatic backdrop to a large portion of Gerua.
Who wouldn’t be bedazzled by the sight of a night sky coming alive with colour? Iceland offers you a good chance to view one of nature’s most specatular shows in action – the northern lights or aurora borealis.
In fact, our Dilwale tinsel-towners caught sight of this splendid spectacle during their 7-day shoot for Gerua in Iceland. We’ll let their tweets speak for them
The spectacular #northernlights #auroraborealis in Iceland over our Hotel! Thanks @iamsrk for choosing to shoot here! pic.twitter.com/M6beB3SyEP — Avinash Gowariker (@avigowariker) August 28, 2015
Oh my Goddddd!!! Northern lights outside our rooms!! Iceland truly welcoming us in style! pic.twitter.com/rFBpXH5p0p — Farah Khan (@TheFarahKhan) August 28, 2015
Vik (or Vík í Mýrdal) at the extreme South of Iceland, is often been referred to as one of the most beautiful places on earth. It is no wonder that Rohit Shetty chose it as a catalyst to SRK and Kajol’s on-screen chemistry in Gerua. Its dramatic beauty emerges from its vast stretches of basalt sand. Away from the coast, stacks of basalt rock have been lent texture and jagged edges because of the ocean sweeping constantly against them,
Vik lies in close proximity to the Katla volcano which has not erupted since 1918.
The Blue Lagoon is Iceland’s most famous hot spring. Other notable geysers (as they are also called) include Reykjadalur which is right near the capital Reykjavík – it involves a little bit of a hike.
Seljavallalaug is also near Reykjavík and offers you the added incentive of absolutely stunning surroundings.
Grjótagjá is a long distance from the capital and closer to the north of Iceland but it offers the distinction of a hot spring experience in a cave.
You can also enjoy a swim in hell if you like… at Víti, meaning hell, in Askja. It is quite a trek up through pumice beds, ash sand and old lava and when you finally arrive at the edge of the crater that forms Viti, it genuinely looks like Lucifer’s own steaming cauldron with its steaming surface and sulfuric gases.
At 60 metres tall, Seljalandsfoss is overpowering and indomitable. But, it turns out that you can scramble behind the plume to find a beautiful cave adorned with hundreds of little flowers (saxifrages to be precise) blooming amidst a carpets of moss and curtains of ferns. The sight of the ocean through the watery veil is sure to give you goosebumps.
Mývatn is a lake formed by a massive volcanic eruption that took place 2300 years ago. Besides its stark, beautiful volcanic landscape, Mývatn is a bird-lover’s haven (in the summer) and comes alive with over 100 species of water birds.
One of Iceland’s captivating local legends states that the Queen of the elves lives in the charming little town of Borgarfjörður Eystri. It is easy to believe when you see the gravity-defying positioning of the rocks in Dyrfjöll, here. Hvítserkur resembles a dinosaur frozen to stone half-way through a drink of water.
The trip to Grímsey rewards you with a double-whammy: you will be crossing over to the Artic Circle and will catch the midnight sun. It is a two-day road or boat trip but is well worth the experience.

You need to get to Akureyri and catch a plane or ferry here. Obviously, this one is time-bound: you need to travel between 15 June and July 1.


Skjálfandi is already beautiful with its fringe of mountains but most tourists make a beeline to this bay in order to see the whales between May and September. Mink whales, blue whales and humpback whales can be spotted fairly easily here. You might also catch sight of a dolphin.

Posted by orientpublication at Saturday, November 21, 2015
Email ThisBlogThis!Share to TwitterShare to FacebookShare to Pinterest