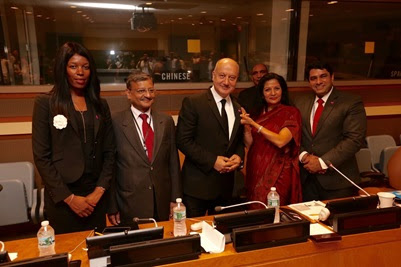 Mr. Kher, who has successfully worked on over 100 plays and nearly 450 films, has been pinned to acknowledge his tremendous contribution and continuing work towards gender equality. At the pinning, Mr. Kher said: “I stand committed to: working with men and boys in India, achieving gender equality, contributing to UN Women’s HeForShe campaign, and taking measures to end violence against women and girls.”

Mr. Kher has been recognized as a leading actor and has been the recipient of multiple accolades and awards. He holds the distinction of receiving eight consecutive Filmfare awards. He has held the post of Chairman of the Censor Board and the National School of Drama, India.
In addition to his work in film, Mr. Kher has been deeply involved in philanthropy and established The Anupam Kher Foundation to spread education among less privileged children and to provide palliative care to people with life-limiting diseases and has been awarded the Dalai Lama Award for his work with underprivileged children.

Ms. Puri said: “I’m thankful to Padhma Shri Anupam Kher for becoming a HeForShe Champion for gender equality. In doing so, he joins our efforts to reach a Planet 50-50 by 2030 and end violence against women. UN Women celebrates his remarkable life and work but also his commitment to the most important project for humanity in this century.”

HeForShe is a global movement that calls upon men and boys to stand up against inequalities faced by women and girls. The campaign strengthens the support for women’s rights as human rights by enlisting the support of men and exhorting them to put themselves forward as advocates for gender equality. More than 400,000 men have already signed on as champions.Earlier recipients are US President Barack Obama, Prime Minister of India Narendra Modi, PM of Japan and other such dignitaries.

Posted by orientpublication at Wednesday, August 19, 2015
Email ThisBlogThis!Share to TwitterShare to FacebookShare to Pinterest