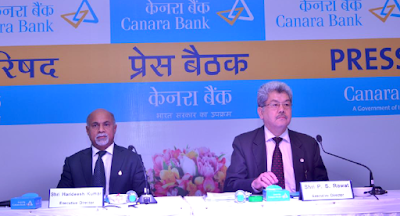  With increase in provision, net profit for Q1FY16 stood at 479 crore.

 26 branches and 506 ATMs added during the Q1FY16, taking the global tally of

expenses, including interest paid on deposits, contained around March 2015 quarter

 While Earnings per Share (EPS) for the quarter was at 9.63, Book Value increased to

 Capital Adequacy Ratio as per Basel III norms stood at 10.75% (as against mandatory

Government shareholding is at 64.48%.

 The Bank’s outstanding restructured portfolio at 28704 crore, constituting 8.73% of

 Advances under Agriculture portfolio increased by 12.91% to 60924 crore, achieving

 Credit to Micro, Small and Medium Enterprises (MSMEs) increased to 61804 crore, with

norm of 20%). The number of micro enterprises accounts recorded a growth of 29.50%

against mandated norm of 10%.

 Credit to women beneficiaries increased to 39818 crore, accounting for 13.77% to

share of retail credit in domestic credit increased to 13.91% compared to 12.72% last

 Opened 68.26 lakh accounts under PMJDY, with a CASA deposits balance of 993 crore.

 The Bank has enrolled 1.41 crore residents under Aadhaar and 96.73 lakh accounts

 51.86 lakhs enrolments have been done so far under both Pradhan Mantri Jeevan Jyoti

 All financial Inclusion branches have mobilized a business of 9347 crore, comprising

 The Bank has formed 119 farmers club during the current FY.

during the current FY.

have been educated and 20195 persons have been counseled upto June 2015 this year.

 The Bank added 506 ATMs during the quarter, taking the total number of ATMs to 9039 as

 Facilities to accept subscription of Social Security Schemes of Govt. of India through ATM,

 Facility for sending SMS to customers for maintaining minimum balance in the account.

In recognition of the varied initiatives, the Bank was conferred with the following awards

 Special Award for the Best Financial Institution – Gold, 2015, by the Federation of

 Order of Merit for SME Enablement during 2014-15 by SKOCH Group.

Income and NPA Management and improving operational ratios, such as, NIM, RoA, RoE
Posted by orientpublication at Saturday, August 08, 2015
Email ThisBlogThis!Share to TwitterShare to FacebookShare to Pinterest