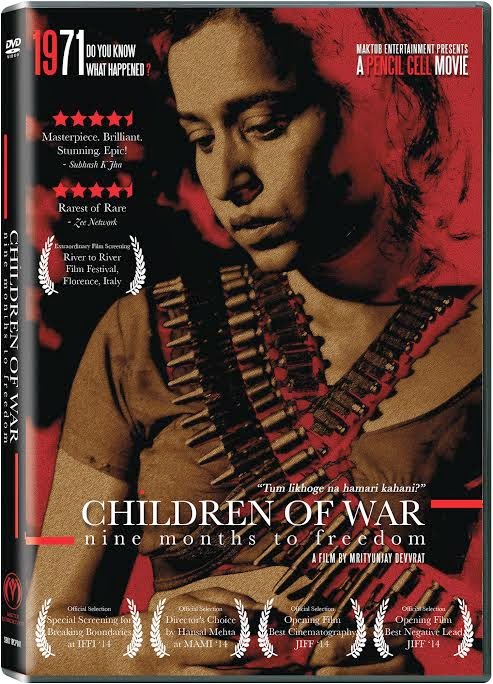 Mumbai, February 2015: ‘Home Entertainment Services by Sony DADC’, India’s leading home entertainment content provider, releases Hindi drama film ‘Children of War’ on DVD & VCD. ‘Children of War – Nine Months to Freedom’ released in theatreson 16th of May 2014 in India and  Bangladesh that garnered huge international critical acclaim for uncovering the veiled subject of the 1971 Genocide by the Pakistani Army.
Consequently, many viewers wrote letters of support for the war crime victims to the United Nations, the House of Commons United Kingdom, the United States Congress and the European Parliament asking them to take note of the film and lend support to trial for justice against the war criminals.

Director Mrityunjay mentions that “I believe that a film maker feels most satisfied when a film can influence positive change in society and just a few days back the Government of Bangladesh re-released the film to mark their ‘Victory Day’ and the parliament has passed a new ruling; recognizing all women victims of rape and war crimes in 71 as freedom fighters! This gives them an equal standing in the society, which is far from how they were treated as recently as a year back. It makes me proud that ‘Children of War’ is not just the first Hindi Film to be released on DVD by Home Entertainment Services by Sony DADC, but is also the first to influence a parliamentary decision.”

The movie is set in the backdrop of the 1971 genocide. ‘Children of War’ brings to surface the agonizing tale of the birth of Bangladesh and recreates with nerve-wracking vividness the horrors of the time when a whole civilization was threatened with extinction. It does so by weaving together three distinct journeys of love, loss, infidelity, sacrifice and the undying human quest for freedom.
The movie is directed by debutant Director Mrityunjay Devvrat and the star cast includes talented actors like Victor Banerjee, Farooq Shaikh, Raima Sen, Pavan Malhotra, Tillotama Shome, Indraneil Sengupta and others.
Children of War has already been hailed as a war epic and finds itself in an elite list of films like Steven Spielberg’s Schindler’s List, Alan Pakula’s Sophie’s Choice, Richard Attenborough’s A Bridge Too Far, Quentin Tarantino’s Inglorious Basterds, Nandita Das’s Firaaq and Shekhar Kapoor’s Bandit Queen.