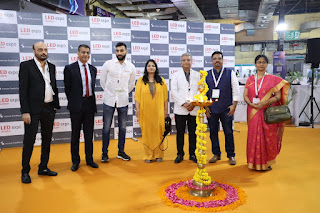 India’s premier business event for LED and lighting technologies - LED Expo Mumbai makes a grand comeback in the financial capital after a hiatus of two years. Organised by Messe Frankfurt India, the three-day business event has opened its doors in Mumbai’s Bombay Exhibition Centre today, bringing over 175 exhibitors and over 1000 products on display.

From solar to smart lighting - introducing market-leading innovations by over 175 Indian exhibitors, LED Expo has opened its doors in Mumbai today and aims to promote made-in-India LED products and applications. Over 50% of the participating brands this year are new entrants on the show floor, reinforcing the Indian industry’s focus to strengthen domestic collaborations and capture the market share.

Extending strong support to the platform, Mr Shyam Sujan, Secretary General, ELCOMA (Electric Lamp and Component Manufacturers’ Association of India) said: “India has been the fastest in the world to convert to LED Lighting. The conventional incandescent bulbs/CFLs are almost extinct in India where many countries are still using it. Energy efficiency in Indian households has touched 88 percent with LED bulbs lighting up homes due to affordable government schemes UJALA. Very shortly almost 100% lighting will convert to LED Lighting, whereas other countries are likely to take more than six to eight years. The LED Expo, organised by Messe Frankfurt India has created a platform for the Indian lighting industry to network with local stakeholders and global visitors, for business development and joint partnerships. There is a great opportunity for visitors to see the futuristic technology at the LED show.”

The key business event was inaugurated in Mumbai by:

Coming back stronger with its return in the financial capital, the organisers shared that “Over the years, energy conservation has been one of the most prioritised implementation programs, and the adoption of LED lighting has significantly contributed to this goal. Considering the enormous progress made in the field of LEDs and the unique displays year on year, LED Expo has succeeded in positioning India as a competent sourcing and manufacturing destination for LED Technologies.” Mr Raj Manek, Executive Director and Board Member, Messe Frankfurt Asia Holdings Ltd said: “LED Expo has been a movement – facilitating the most effective marketplace for the business of LED technologies. Today, with the strong support of several government stakeholders, we aim to lend further momentum for B2B collaborations, partnerships, and strengthening domestic distribution network - which will mark the next phase of LED technology development, manufacturing and implementation.”

Posted by orientpublication at Friday, May 20, 2022
Email ThisBlogThis!Share to TwitterShare to FacebookShare to Pinterest