Behind The Scenes Pictures From The Sets Of ‘Kulkarni Chaukatla Deshpande 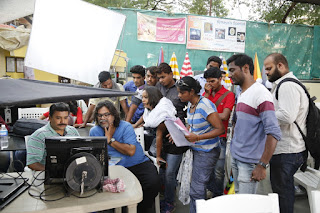 Sai Tamhankar has always given her the best output in every character she played is coming up with a new character of the upcoming Marathi film ‘Kulkarni Chaukatla Deshpande’. In this character, she is fighting a battle with life to make her own identity whereas on the other side she also got stuck emotionally in her role of motherhood. Along with Sai, Nikhil Ratnaparkhi and Rajesh Shringarpure have their important role in this film. Audiences have already seen a glimpse of the on-screen characters of these actors. We are bringing behind the scenes moments for the audience which we shot during the shoot of this film. The audience doesn't have to wait much longer as ‘Kulkarni Chaukatla Deshpande’ is getting released on coming 22nd November all over Maharashtra.
Posted by orientpublication at Wednesday, November 13, 2019
Email ThisBlogThis!Share to TwitterShare to FacebookShare to Pinterest