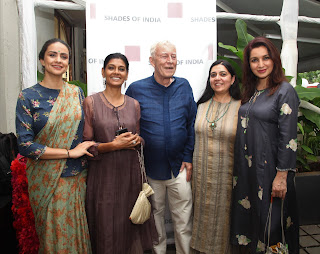 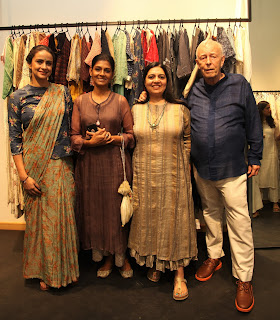 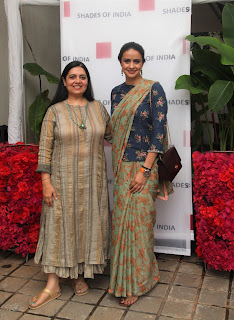 Shades of India, the premium lifestyle brand, of a design house with a 20-year textile and design legacy launched its first store in Mumbai on Wednesday, 11th September.


Founded in the early ’90s by Mandeep Nagi and David Housego, the brand has come to be known for their passion and imaginative approach to textiles over the last 20 years. As the newest jewel in Bandra’s crown, Shades of India will offer seasonal collections for apparel, textile jewelry, bags, and soft furnishings for the home.
Present at the press preview today were friends of the brand Nandita Das, Gul Panag and Tisca Chopra.

For Mandeep Nagi, Design Director, at Shades of India, textiles have been a passion since
childhood. “I remember stealing into my mother's room,” she says “and taking out her beautiful old saris. I fondled them, gazed at the colours and patterns, and marveled at the touch and colours. It was a very formative experience.”

Formative as well were her early years at Shades of India when she got a chance to travel to all the textile centres across India. She worked with women's groups in Banas Kantha on embroideries, travelled through Gujarat and Kutch studying different techniques, and spent time in Lucknow and Rampur on developing Chikan embroideries and khadi fabrics from West Bengal.

Later she had the chance to travel a lot to Europe and the US where Shades of India regularly
participated in Trade Fairs such as Maison et Objet in Paris and the New York Gift show. “I admired designers who had absorbed diverse influences - like Jean-Paul Gautier who combined black stockings with vintage costume’, she says.

It was out of this background that Mandeep's own design sense evolved. She loves opposites – fine traditional artisanship interpreted with a minimalist western sensibility: masculine and feminine: a surprising contrast of colours such as mixing orange with blue or red with a limp grey.
“I start any collection by deciding on colours. Colours are the first thing that set a mood for a new collection,” she says.

Mandeep feels that with her experience of more than 20 years in designing textiles she can easily
imagine a product, whether clothes or home textiles even before it is constructed “If I close my
eyes in two minutes I will know how a new piece of textile will look. The whole journey from imagination to actual is what excites me”

As creative head of the Company, Mandeep is responsible for designing four collections of apparel a year, accessories to accompany them and two collections for the home. ‘We are a textile brand’, she says, ‘in which I seek to convey a unity of style.’ She has also designed the interiors of the new Mumbai shop in Bandra West with an emphasis on minimalism, clear lines and a sense of peace and space.

She has won several design awards both in India and in Paris and New York. She is a Graduate and has a Diploma from YWCA and NIFT Delhi.  She finds inspiration from exchanges with the academic world in textiles and many young textile graduates.
She is married to David Housego, Chairman of the Company. They have a daughter, Meher, aged 11, who also has a passion for textiles.

Posted by orientpublication at Thursday, September 12, 2019
Email ThisBlogThis!Share to TwitterShare to FacebookShare to Pinterest