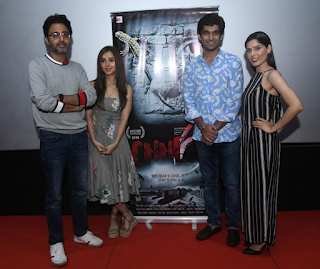 If you don’t Believe in Legends… Start believing in one.

Mumbai: Dilip Sood Films’ maiden horror psychological thriller movie Chhe-6” is a showcase about the reality of adventure of six youngsters and how a certain incident that they experience which change their lives forever.

A special screening of the Horror movie Chhe(6) which has won several awards at international film festivals was held in Suburbs. The guest list had eminent media personalities, along with Director Dilip Sood, Actors from the movie Suzzana Mukherji, Puneet Channa and bollywood actor Sonam Arora amongst others.

Those six didn’t believe in the legends.. The legends those were there from centuries… and for a reason.
What if you start seeing what lies behind those dark scary walls? How you wish you never saw it.
That’s exactly what happened when six friends planned a trip to the most haunted place to experience an adventure of their lifetime. Just then, slowly one by one they found themselves taken over by the evil. And soon they could not tell the difference between a friend and a foe.
6 friends trapped inside a haunted fort, and all they had to do was to survive till 6 in the morning.. by the sunrise.. Will they make it?

Chhe (6) is a Horror Psychological Thriller, that is about how an adventure goes horribly wrong and creates a massive impact on the youngsters. It centres on the protagonist 6 youngsters who travel between the time periods of 6’o clock. The lead characters are played by Suzanne Mukherji, Puneet Channa, Adeel Chaudhry, Herry Tangri, Annie Sekhon, and Debonita Sur. It is Directed & Produced by Dilip Sood.  Chhe (6) is 1 hour 44 mins horror thriller that leaves the viewer shocked and mystified.

The idea behind the story is to explore the possibility of what would happen if we could experience adventure realities in one lifetime.

There are very few Indian film directors who have attempted to make a film on the subject of science fiction and horror and the awards and accolades the film has already garnered internationally, stands testimony to the depth and quality of story telling that Chhe (6) portrays.

Director Dilip Sood Says, “The idea of the film Chhe (6) is to reinforce the fact that there’s a world that exists beyond what a human eye can see. The dark world which is casually negated by us could as well be the truth. Generally in Indian films, Horror is shown by the camera movements in the nights, but here the fear looms at large in the broad daylight.”
Actor Suzanna Mukherji added to it by saying, “Because of our mentor Mr. Dilip Sood, all of us could get international recognition and a chance to feature in such an amazing film.”
About Director & Producer : Dilip Sood is a filmmaker from India with more than 18 years of experience and his works include award-winning feature films, short films, popular TV shows like ‘School Days’ and ‘Yahan ke Hum Sikander’ and web series. His latest film is CHHE (6) that has been selected and won several awards at numerous film festivals across the globe.
For further information :
Posted by orientpublication at Friday, September 20, 2019
Email ThisBlogThis!Share to TwitterShare to FacebookShare to Pinterest