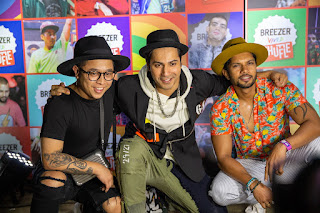 Mumbai, September, 2019: After touring 10 cities across the country and with an international round in Bangkok, India’s biggest hip-hop dance festival, conceptualized by OML, Breezer Vivid Shuffle, concluded Season 3 with a smashing finale last night on 21st September at Famous Studio, Mahalakshmi, Mumbai. Varun Dhawan, Breezer Vivid Shuffle's Ambassador and fellow hip-hop enthusiast, announced Bfab Crew as the winners of Crew Showcase category of Season 3, along with winners Eshwar Tiwari AKA Bboy Wild Child (Breaking category) and Neeraj (popping category). The winners bagged a cash prize, the highest for any hip-hop dance festival in India, the chance to go to an international dance festival, the opportunity to feature in an exclusive music video alongside Varun Dhawan, and the chance to perform at BACARDÍ NH7 Weekender, the happiest music festival.
Finalists this year included 16 participants (breaking), 16 participants (popping), 64 participants (crew showcase) featuring entries from Dubai, Philippines and Thailand. This year, the festival saw 7 regional rounds including 1 international round, 20 workshops, 10 after parties and 1 grand finale!
“It feels amazing to have been part of India’s ultimate hip-hop dance platform for the third time. It’s crazy to see how Breezer Vivid Shuffle and the contestants keep upping their game with each year. There is so much talent out there which often goes unrecognised. This is a platform where they can express themselves and live their passion in colour, with their crazy and fun moves. Big shout-out to Breezer and OML and kudos to all the contestants once again!” said Breezer Vivid Shuffle Ambassador Varun Dhawan.
This year, the festival witnessed participation from nearly 1500 number of participants across the country and around the world. Nearly 5000+ hip-hop lovers converged at their workshops and afterparties throughout, which featured names like Melvin Louis, Himanshu Dulani and Sagar Bora, Naezy, Gullygang, Malfnktion, Incink Records and Gully Gang Records, etc.
“Three years ago, when we started out with Breezer Vivid Shuffle, our objective was to help provide recognition to budding hip-hop artists in the country. After yet another phenomenal year and the response we’ve got from the regional rounds and cypher editions, I believe we have been successful in achieving what we aimed for. We’re grateful to have had some of hip-hop’s biggest names working with us throughout the season to give this platform and its artists the recognition they deserve. The festival went international this year and we look forward to expanding it more with the future editions of Breezer Vivid Shuffle.”, said Anshuman Goenka, Marketing Head, Bacardi India.
“Sending out a lot of respect to the dancers/artists who have been a part of Breezer Vivid Shuffle over the last three years. I've seen massive growth in the community and we will continue to develop more talent to make a mark in the global hip hop scene.” said Raashi Sanghavi, Festival Director, Breezer Vivid Shuffle, OML.
It was a truly grand finale with terrific performances by global dance champions Kings United, electronic artist Yung.Raj, and desi hip-hop collective Swadesi. The finale also showcased performances by international artists such as Kid David from Step Up 3D, Rashaad Hasaani Pearson and Emmy Award winner - Hok.  The competition was launched earlier this June in Mumbai, with an exclusive secret cypher party hosted by Varun Dhawan, which saw crazy, fun moments with the best of the hip-hop community.
Posted by orientpublication at Tuesday, September 24, 2019
Email ThisBlogThis!Share to TwitterShare to FacebookShare to Pinterest