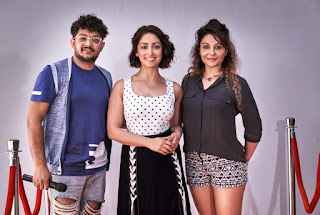 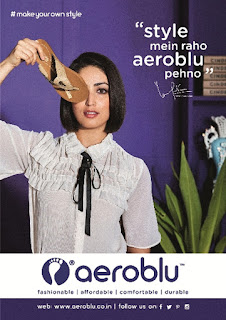 Mumbai, 27th Aug.2018: Alaukik Desai, the creative brain behind multiple campaigns’ with Hrithik Roshan, Prinyanka Chopra, Ajay Devgan and several top actors, is back with his latest TVC with Bollywood actress YAMI GAUTAM for footwear Brand AERO BLU. Alaukik Desai shot this with the Kaabil & Vicky Donor Actress YAMI GAUTAM across various thematic sets with vibrant colours. “When TVC was being designed we decided on 6 different set ups like a Bollywood song’, says Alaukik Desai of Alaukik Films. “The idea behind the 6 set ups was the cover the different range that the ethnic wear, office wear so we had people in different get ups on the shoot. We have Marathi, Bengali, South Indian characters just to capture every angle of desi Indian feel.
Alaukik Desai speaking on this campaign said “ I have shot with several Bollywood celebrities in the past too like Hrithik, Sonakshi, Sonam Kapoor, Ajay Devgan etc. For me every TVC is like a producing a feature film. It requires the same amount of preparation time, pre production as of a feature film. To integrate the grandeur that Bollywood Celebs are so synonymous with is what I prefer in my theme. I prefer to shoot it like a feature film format since I feel it connects better with masses for a brand like AEROBLU. Working with Yami was fun since she understood my vision, style & requirements of the brand”
Said Yami Gautam, Brand Ambassador AEROBLU, on her association with Alaukik Films during her shoot, “I think Alaukik is really good This is the first time I have worked with him. They are very clear in what they want and very easy to work with. This AD gives dance and music kind of a vibe which we usually find in films. So it’s very refreshing to have it in TVC where there is song and dance, its good fun and very innovative”.
Alaukik’s campaigns are always very innovative, fresh & with a story to be told. The philosophy of understanding the client emotions & feelings behind the brand and turning it into stylised creative brand identity. His forte is complete brand packaging, client values, beliefs & price segments and understanding the client’s sentiments. Alaukik is known for his highly structured stylised campaigns and larger than life execution that makes brands stand out in the clutter.
www.alaukikfilm.in
Posted by orientpublication at Tuesday, August 28, 2018
Email ThisBlogThis!Share to TwitterShare to FacebookShare to Pinterest