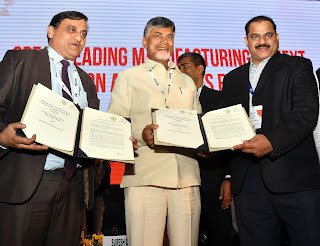 ·        Greenfield facility to come up in Visakhapatnam

This new greenfield facility with an annual production capacity of 2.4 million wheels per year, benchmarked at 18” wheel size will have the most sophisticated casting, machining, painting facilities with embedded digital manufacturing technologies; to offer its’ Customers the best possible product at the most competitive prices.  The Project cost of $100 million will be financed by the existing shareholders, accruals and bank debt.

With the auto industry poised to see a major growth in the coming years, and the increased penetration of alloy wheels in India, SYNERGIES is gearing up to meet the steep demand by increasing production capacity manifold and fulfilling the needs of its veritable customer base.

Andhra Pradesh is emerging as major Auto hub in the country. The state has attracted an investment of $3.7 billion (about Rs 25,000 crore) in the auto sector . The state of Andhra Pradesh now boasts of presence of auto companies like Korean  Kia Motors, Japanese auto major  Isuzu, two-wheeler major Hero Motocorp, Apollo Tyres, Bharat Forge and Brakes India among others

This agreement with the state of Andhra Pradesh sets the stage for building one of the largest single location alloy wheel manufacturing projects, with intent to expand this to 5 million wheels in multiple phases.  Mr. Shekhar Movva, President SYNERGIES CASTINGS LIMITED, commented, “As customer requirements become exceedingly more stringent, and consequent need to invest in substantial capex for sophisticated production, testing and development facilities, it is important to scale up and tech-up to remain competitive.  While we have evaluated several manufacturing location options in the country, we believe that Vizag, and the terms of engagement with the state of Andhra Pradesh offers the best opportunity to be the most competitive manufacturer of Alloy wheels in the country.  Further, with the GST regime on, there is no penalty to moving goods across geographies and thus large-scale manufacturing makes sense.” This initiative is in sync with the Government’s push to make Andhra Pradesh an automobile hub of the future.  Together with its ancillaries, this venture will provide more than 2000+ skilled jobs in the region.

This marks another step forward in the strategic growth of Synergies.  Together with the ongoing expansion at the existing location, the new greenfield plant being built in Oman, and this proposed new greenfield, the Company is on-course to becoming a 6-million-wheel Capacity Company by 2022-23.  “We are committed to being the technology and market leader in India; and are investing significantly in new casting, forming, finishing and automation technologies to retain this leadership.”

SYNERGIES the pioneer and leader in manufacturing alloy wheels in India, located in the VSEZ Visakhapatnam, has been supplying to leading OEMs in India and overseas for more than 17+ years now.  Its wheels have adorned several iconic vehicles such as the Hummer, the Escalade, the Jeep, amongst others.  SYNERGIES is a globally approved alloy wheels supplier to several automobile majors like General Motors-USA, Ford-USA, Chrysler-USA, General Motors-India, Ford-India, TATA Motors, Toyota, Hyundai, Fiat, Volkswagen, Honda and Mahindra & Mahindra amongst others, and is amongst India’s leading exporters.

The Company has earned several prestigious awards over the years including awards for the highest exports, for the highest quality from Toyota, Chrysler, etc., as well as Global Best Quality Supplier Award from General Motors in 2013 and 2015.
Posted by orientpublication at Thursday, May 03, 2018
Email ThisBlogThis!Share to TwitterShare to FacebookShare to Pinterest