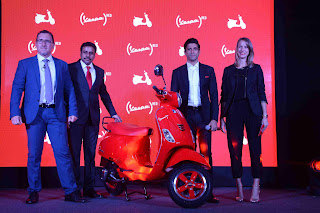 Mumbai, 3rd October 2017: Piaggio Group launches the (VESPA)RED in India as part of its partnership with (RED)® and commitment to the fight against AIDS. Bollywood celebrity, Farhan Akhtar, presented and owned the first(VESPA)RED in Mumbai today.
Vespa and (RED)® are two prestigious and highly respected worldwide brands, and they have joined forces as they share the same values and a common vision that wants to leave a better world for future generations.

Vespa, a model born to celebrate the beauty of a mode of transport that has achieved legendary status, is the first brand from the automotive world to collaborate with (RED)®.
Throughout its history, Vespa has been surpassing the bike’s core function as a simple and elegant vehicle and turning it into an extraordinary testament to its time, interpreting societal change and evolving accordingly. As such, funding an international project of such high social sensitivity is wholly consistent with Vespa's values and DNA – after all, The Piaggio Group through its charity program “Vespa for Children” has historically been sensitive to the problems connected with protecting the health of children

This (VESPA)RED is a highly exclusive model, created specifically for the Indian market alone. Not only does it contribute to a social cause, it is also a fascinating product, the cutting edge of the Vespa experience in terms of style and image.

When a (VESPA)RED is purchased, it will trigger a $50 USD donation to the Global Fund to fight AIDS in India. Each scooter sold can help provide more than 165 days of lifesaving HIV medication – medication which can help save a mother’s life and prevent her from passing the virus to her unborn baby.

Vespa is proud that it’s renowned bike and beloved product is turning (RED)® — elevating its elegant style and design to new heights – now has the power to fight AIDS in India. (VESPA)RED is offered in a high definition red body colour, complementing 12” red alloy wheels, red art leather seats and powered by a 125 CC engine. The bike has features like 220 mm front disc brake, Monocoque single piece steel body, aircraft inspired single sided front suspension, and many more. The (VESPA)RED is also offered with colour coordinated exclusive (VESPA)RED merchandise including a helmet, T-shirt and hat. It will be priced at
Rs. 87,009/- ex showroom Mumbai and will be available for sale at Vespa dealerships across the country.

Farhan Akhtar said, in support of the cause represented by the collaboration, “I am privileged to present this initiative to the country and proud to own the first (VESPA)REDbike. I am honored to be a part of this endeavor for the fight to end AIDS here in India.”

Commenting on the launch, Mr. Diego Graffi, Managing Director and CEO of Piaggio Vehicles Private Limited (PVPL) said, “It is a matter of great pride for us to introduce the (VESPA)RED in the country. The iconic Vespa is a socially responsible brand and has always given back to society in supporting similar causes in other geographies. Through this association in India, we aim to provide an environment where people are better equipped to fight preventable and treatable diseases.”

“We’re thrilled that, through our ongoing partnership, Piaggio is - for the very first time - now raising money to support the critical work of the Global Fund in India,” said Deborah Dugan, CEO of (RED). “The (VESPA)RED is beautiful not only because of its striking red color and great design, but the best feature of this scooter is that it's fighting AIDS."

About (RED)®:
(RED) was founded in 2006 by Bono and Bobby Shriver to harness the power of people and companies to help fight AIDS. (RED) partners with the world’s most iconic brands that contribute up to 50% of profits from (RED)-branded goods and services to the Global Fund. To date, (RED) has generated more than $475 million for the Global Fund to fight AIDS and support HIV/AIDS grants. 100% of that money goes to work on the ground – no overhead is taken. Global Fund grants that (RED) supports have impacted more than 90 million people with prevention, treatment, counseling, HIV testing and care services.

About Piaggio Vehicles:
Piaggio Vehicles Private Limited (PVPL) is a 100% subsidiary of Piaggio Group, founded in 1884, leader of the European powered two-wheeler market. The Group manufactures scooters and motorcycles as well as three and four wheeled commercial vehicles with an impressive portfolio of brands including Piaggio, Vespa, Aprilia, Moto Guzzi and Apé.

Piaggio invented the Vespa in 1946. Having successfully established itself in the world wide two wheeler segment, Vespa was launched in India in April 2012. The company has a state-of-the-art plant in Baramati, Maharashtra, where it manufactures the iconic Vespa alongside the newly launched Aprilia SR 150 and also manufactures a range of 3 and 4 wheeled commercial vehicles at a separate manufacturing facility in Baramati.
Posted by orientpublication at Wednesday, October 04, 2017
Email ThisBlogThis!Share to TwitterShare to FacebookShare to Pinterest