DURAVIT CELEBRATES 200 YEARS : THE DESIGNER BATHROOM – PAST AND PRESENT 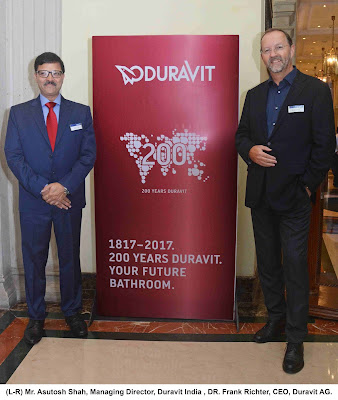 2017 Today, Duravit AG is a leading international manufacturer of designer bathrooms. Duravit has carefully managed its brand, which is synonymous with holistically designed bathrooms. "In fact, we see ourselves as interior designers for bathrooms as living areas," says Frank Richter, CEO. But how did the success story of the Duravit brand develop over the 200 years of the company’s history?
1817. As is well-known, it all began in the Black Forest. Initially, the Steingut-Fabrik [Earthenware Factory] Hornberg, founded by Georg Friedrich Horn, produced tableware. 25 years later, in 1842, the company’s production was broadened to include the first sanitaryware products that have been sold under the Duravit brand name since 1960. Frank Richter went on: “During the first 150 years, the company’s main focus was on quality and precision in the manufacture of ceramics." During one and a half centuries, as part of the industrial revolution, the technical possibilities, basic scientific principles and the commercial environment changed so much that an evolution of the bathroom and its products finally became possible in the second half of the 20th century.
1987. Most people date the increased importance of design in the bathroom to the mid-1980s, when renowned and ambitious designers first began paying greater attention to the “wet cell bathroom”. Duravit has played a key role in establishing the significance of bathrooms over the past 30 years. In the late 1980s, Duravit worked with Dieter Sieger to present its first designer range for the bathroom. Yet Giamo was only the beginning, and the first complete designer bathroom, created with Philippe Starck, revolutionised the sanitary industry when it was launched in 1994. Today, numerous internationally renowned designers work for Duravit.2007. The company continuously grew during the years and decades that followed, adding international emphasis, and technological aspects also became a part of Duravit's DNA. The Research and Development Departments of the international company are located at the company’s German headquarters in Hornberg and the Duravit Sanitaryware Technology Center in Shanghai. Here, Duravit continually develops innovations in all areas, from materials engineering to flushing technology and electrical engineering for light, sound and whirl systems, and the look, feel, acoustics and usability play an important role here, too. In this way, the company meets the present and future requirements of its clients in all areas. Frank Richter emphasises: “The brand triad of quality, design and technology is what distinguishes Duravit”. Today there are 5 product areas: Ceramics, furniture, wellness technologies (including shower-toilets, whirlpools, saunas), tap fittings and accessories. The company produces at eleven locations around the world. Duravit has some 6000 employees round the world, and in 2016 the turnover was 450 million Euros.
Since seven years design bathroom manufacturer : Duravit AG runs a production site in Gujarat


Strong bands: The relationship between India and Germany and mutual inspiration means that the two countries are more than business partners. As both are stable liberal democracies, they have similar objectives. Culturally too, Interior design preferences and lifestyle trends also often influence one another. Like for example bathroom and wellness trends. Today, India is emerging as a major sanitary ware market in the Asia-Pacific region. Given this favourable economic situation, it was a logical step for the German-based design bathroom manufacturer Duravit AG to open a ceramic production site in the state of Gujarat in 2010.


The plant in India is the Duravit Group’s tenth production site worldwide and covers an area of around 170,000 m². Before the opening of an own subsidiary, the company has been operating in India since 2001 via wholesalers. Since then, the subsidiary has already earned the status of a recognised export house, with ISO 9002 Certification, ISO 50001 certifications and ISI mark.
When Duravit has chosen the state of Gujarat as the location for its production facility, the company was one of the first investors in this region. “For Duravit, quality is a central success factor in order to ensure the satisfaction of business partners, architects and consumers. When we started, we developed the infrastructure and trained the people to meet Duravit’s high quality requirements“, says Asutosh Shah, Managing Director of Duravit India. These uniform quality management standards of the company are already established at the Duravit India production site and have been certified by the German TÜV Rheinland with the EN ISO 9001 quality standard in December 2013. Nowadays, the Indian plant is one of the most modern state-of-the-art plants and has a workforce of 350 people in aggregate. In July 2014, Duravit India opened a showroom at the production site. The product presentation is based on experiencing and learning about the brand directly.


“Duravit expects the Indian market to continue on its growth path. We therefore plan to maintain our focus and extend our activities in this region”, says Duravit CEO Frank Richter. Amongst others, the bathroom manufacturer is benefitting from the strong demand for design and lifestyle brands in India. The bathroom itself has become a popular lifestyle theme; purely functional bathrooms are increasingly a thing of the past in India. Modern bathrooms feature comfortable, holistic concepts based on individual needs. Ideal conditions for the design bathroom manufacturer: “We see ourselves as interior designers for bathrooms as living areas, and have ourselves played a key role in establishing the new significance of bathrooms in India and all over the world,” says CEO Frank Richter. The demand for Duravit products in India comes from the project business as well as from the private sector. The company has already made an impact in India as a premium designer bathroom brand with presence in more than 75 luxury hotels and over 150 premium residential apartments. Having achieved a wide acceptance , the brand is present across 400 retailer showrooms in India. Moreover, Duravit India has deployed an after-sales service team across most parts of the country. Success lately proves the company right: Duravit has already become one of the most well-known designer brands. In March 2017, Duravit sold approx. 20.000 toilets and washbasins to the project development company “Magarpatta Township Development and Construction Co. Ltd.”, one of the largest and best-known building development firms in India.

Posted by orientpublication at Wednesday, September 20, 2017
Email ThisBlogThis!Share to TwitterShare to FacebookShare to Pinterest