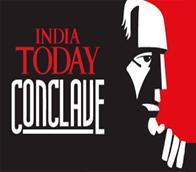 The India Today Conclave, where the sharpest minds from across the globe converge at a forum to discuss and debate issues from around the world, is back. Taking a break from previous years, the India Today Group's signature event will be held in Mumbai for the first time on March 17 and March 18 and will stir and fuel new ways of thinking.

This year, the Conclave will provide an open platform to analyse this era of The Great Disruption with some of the world’s most notable changemakers. The Great Disruption, the theme of the India Today Conclave this year, will feature ground-breaking ideas, innovative experiences and thought-provoking debates. Some of the finest experts will be on hand--thought leaders who analyse our age, politicians who determine our headlines, policy makers who shape our future, and entertainers who sprinkle stardust our mundane existence.

Speaking on the occasion, Conclave Director Ms. Kalli Purie, said, “This edition of the India Today Conclave is a progressive and directional platform that aims to contribute in rebuilding the disrupted social order. This specially designed multi-sensory experience, spread across two days will be a great opportunity to listen to some of the sharpest minds across the world, get inspired and take some meaningful memories back home. We believe that significant conversations are the way to generate solutions and the Conclave promotes just that. From mobile movie premieres, spell-binding stage performances, curated experiences and gourmet delights – there’s lots that one can enjoy at the Conclave, apart from a powerful thought flow.”

Come to India's busiest two days at the India Today Conclave 2017 with the world's best sharing one stage:

Posted by orientpublication at Monday, March 06, 2017
Email ThisBlogThis!Share to TwitterShare to FacebookShare to Pinterest