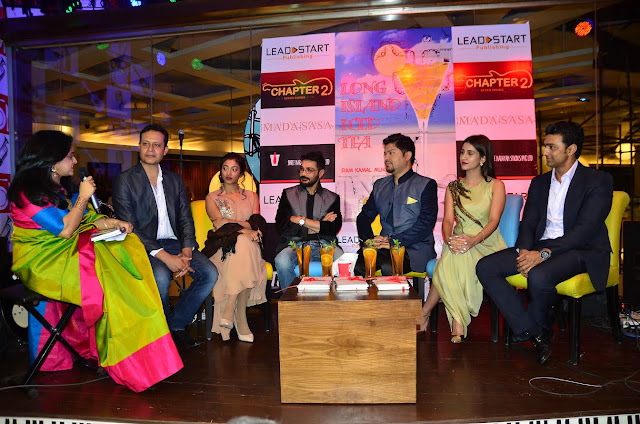 It was one of the most glamorous book launches that the City of Joy had seen in a long time. Veteran film journalist-turned producer, Kolkata boy in Mumbai, Ram Kamal Mukherjee's collection of short stories, Long Island Iced Tea was unveiled by a stellar gathering of Tollywood legends, stunning actors, industry veterans and a smattering of corporate bigwigs. The glittering launch event was held on Saturday, at Chapter 2, Mani Square.

The evening began on a musical note, with a soulful performance by upcoming singer and reality TV star Sayani Palit. Star guests Prosenjit (dapper in a black and grey suit that accentuated his trim physique), Paoli Dam (gorgeous n a beige and gold outfit), Rukmini Maitra (in a pastel -  green dress) and the dashing Dev, took to the stage along with author Ram Kamal, Swarup Nanda (MD, Leadstart Publishing), and journalist-author Chandrima Pal.

There was palpable bonhomie between the stars and the author, as they recalled the first time they met "their friend"  and how their bond with him has deepened over the years. Anecdotes were shared and so were laughs over censorship, secrets and a fair bit of good humoured leg pulling, courtesy  Dev, who was evidently having a good time. Rukmini, read out a small excerpt from Broken Frame, and spoke of how it touched a chord with her, and left her deeply disturbed. Prosenjit spoke of what attracts him the most in a short story (the surprise ending) and Paoli preferred to tease the audiences with just a bit about the "poison" Long Island Iced Tea that she had shared with Ram Kamal.

One a more sombre note, when Chandrima Pal asked Ram about why many of his female characters conveyed their emotions through handwritten letters, he said: Women in our families never get a chance to speak. Even when they try to speak out they are cut short, dismissed. Letter writing is a dying art form that helps women express themselves, have the last word literally. " He also quoted is former employer, senior media person Pritish Nandy who cherishes his collection of handwritten letters, and a beautiful verse by Gulzar that mourns the lost art of meaningful, thoughtful conversations and letters in the age of smartphone technology.
Others guests included: