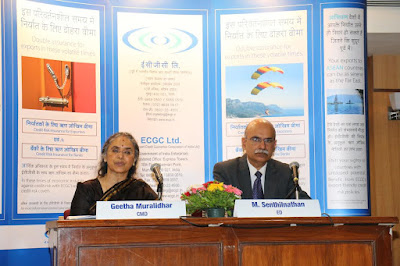 ECGC Ltd. paid out record claims of Rs.1122.84 Crores to Indian exporters and financing banks during FY 2015-16 in the wake of continuing global economic recession and uncertainties.  The Corporation’s paid-up capital stands at Rs. 1300 crores, while the Authorised Capital is Rs.5000 Crores. Net Worth as on Mar 31, 2016 is Rs. 3279.31 Crores.  ECGC has built up cumulative provision aggregating to Rs. 4384.46 crores as on March 31, 2016. The total assets under management is over Rs.7100 Crores. The Corporation’s Solvency Ratio as on March 31, 2016 was 9.79    vs. the regulator’s norm of 1.5 .The organization is ‘iAAA’ rated by ICRA which denotes highest claim paying ability.
Addressing a media meet to highlight business performance for the FY 2015-16, Mrs. Geetha Muralidhar, Chairman Cum Managing Director of ECGC mentioned that the Corporation was able to meet expectations of its customers as well as stakeholders. During the past three years, Indian exporters suffered financial losses owing to the global economic slowdown and resultant failure of a large number of overseas buyers due to European crisis, slowdown in China, and fall in international crude prices. Therefore, the role of ECGC, the national export credit insurer of India, has been and will continue to be very crucial as exporting without suitable credit insurance is fraught with financial and business risks.  Also the cover enabled banks to continue to lend to exporters. During FY 2015-16, ECGC paid out 439 claims worth Rs.127.32 Crores to exporters under direct policies and 172 claims worth Rs.995.52 Crores to financing banks under Export Credit Insurance Covers issued to Banks.  Major sectors under which the claims arose are gems & jewellery, readymade garments, agricultural Products , synthetic Yarn, Engineering Goods, chemicals , marine products & leather.
On 31.03.2016 ECGC had 11525 short term policies and 284 ECIB covers in force, Under the ECIB covers over 25342 accounts of exporters financed by various commercial banks were covered. The share of Banks covered by ECGC in export credit disbursement is around 75%. All the Government owned banks and 14 private sector banks are under the cover of ECGC. As regards Policy business, the Corporation presently underwrites risk on 237 countries of the world and maintains records of about one lakh active buyers all over the world . During the FY 2015-16, the Corporation added  18278   new buyers to its database. The data on buyers is used for underwriting commercial risks on the buyers. ECGC covered gross risk value of Rs. 135872 Crores under its Short Term Policy schemes for exporters during FY 2015-16.
ECGC also covers risks of project exporters and banks involved in the medium and long term exports. Under this sector, the Corporation issued 21  Policy covers to exporters and  92 covers to Banks during FY 2015-16 . Major projects supported by ECGC , are being executed in Vietnam, Cambodia, Nepal, Brazil & Argentina.
On account of Government Of India, ECGC operates National Export Insurance Account (NEIA) Trust to provide insurance support to large value projects in high risk countries , which are beyond underwriting capacity of the Corporation .
Dwelling on the financial results of the Corporation for 2015 -16, Mrs. Geetha Muralidhar mentioned that the Corporation’s financial results during the year were highly satisfactory. After making adequate provisions for pending claims and as per IRDA guidelines in respect of impending risks on 31.03.2016, the Corporation earned a PBT of Rs. 387.35 Crores registering a growth of  51.80 % over the previous year. PAT for the FY 2015-16 stood at Rs. 276.22 Crores compared to Rs.180.10 crores during the previous years.  Dividend proposed to its sole shareholder, Govt. of India is Rs.78.23  Crores, including dividend tax.
During the year 2015-16 , ECGC took various initiatives to promote exports and improve services to its customers viz.exporters and Banks . These include organizing Customer Consultation Campaign for non-Policyholders & export promotion seminars in association with Trade Bodies & Export Promotion Councils at export centres across the country, motivating exporters through awards for high performing exporters in different segments. A number of customer-friendly measures are in the pipe-line emerging out of Mr. Hakeem’s Study.  On April 18th, 2016, as a first step, the Corporation has already announced the reduction in premium rates for exporters by an average of 17% under several of its insurance schemes.  Few other initiatives we are awaiting necessary approvals which we expect to receive very soon and implement them.
The year ahead looks challenging for the exporters and the Ministry of Commerce is taking several steps to address the difficulties being encountered by our exporters.  ECGC is also looking forward to a reasonably good growth in business in FY 2016-17 by making credit insurance more easily accessible for the exporters. In the International arena of credit insurers, ECGC had the privilege of holding Chairmanship of Regional Co-operation Group of Berne Union which is an association of 73 ECAs (Export Credit Agencies) worldwide.

Posted by orientpublication at Saturday, May 21, 2016
Email ThisBlogThis!Share to TwitterShare to FacebookShare to Pinterest