BANK OF BARODA ANNOUNCES FINANCIAL RESULTS FOR THE QUARTER AND YEAR ENDED MARCH 31, 2016 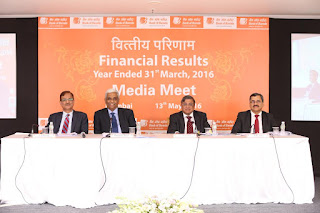 Results at a Glance (Standalone Basis)

All figures in INR crore


The Bank’s International Business continued to occupy a significant position. As at March 31, 2016, the Overseas Operations contributed 31.29% to the Bank’s Total Business.


The second component is provision of INR 1,564 crores for pension liability and which has arising on account of the shift in mortality table.


Commenting on the Bank’s performance, Mr P.S. Jayakumar, Managing Director & CEO, Bank of Baroda said, “The year 2015-16 has been one of transformation addressing NPAs. We are excited by the transformation journey we have embarked on, which will give us leadership position in the banking and financial services sector.

About Bank of Baroda


Bank of Baroda (“The Bank”) established on July 20, 1908 is an Indian state-owned banking and financial services organization, headquartered in Vadodara (earlier known as Baroda), in Gujarat, India.

Posted by orientpublication at Saturday, May 14, 2016
Email ThisBlogThis!Share to TwitterShare to FacebookShare to Pinterest