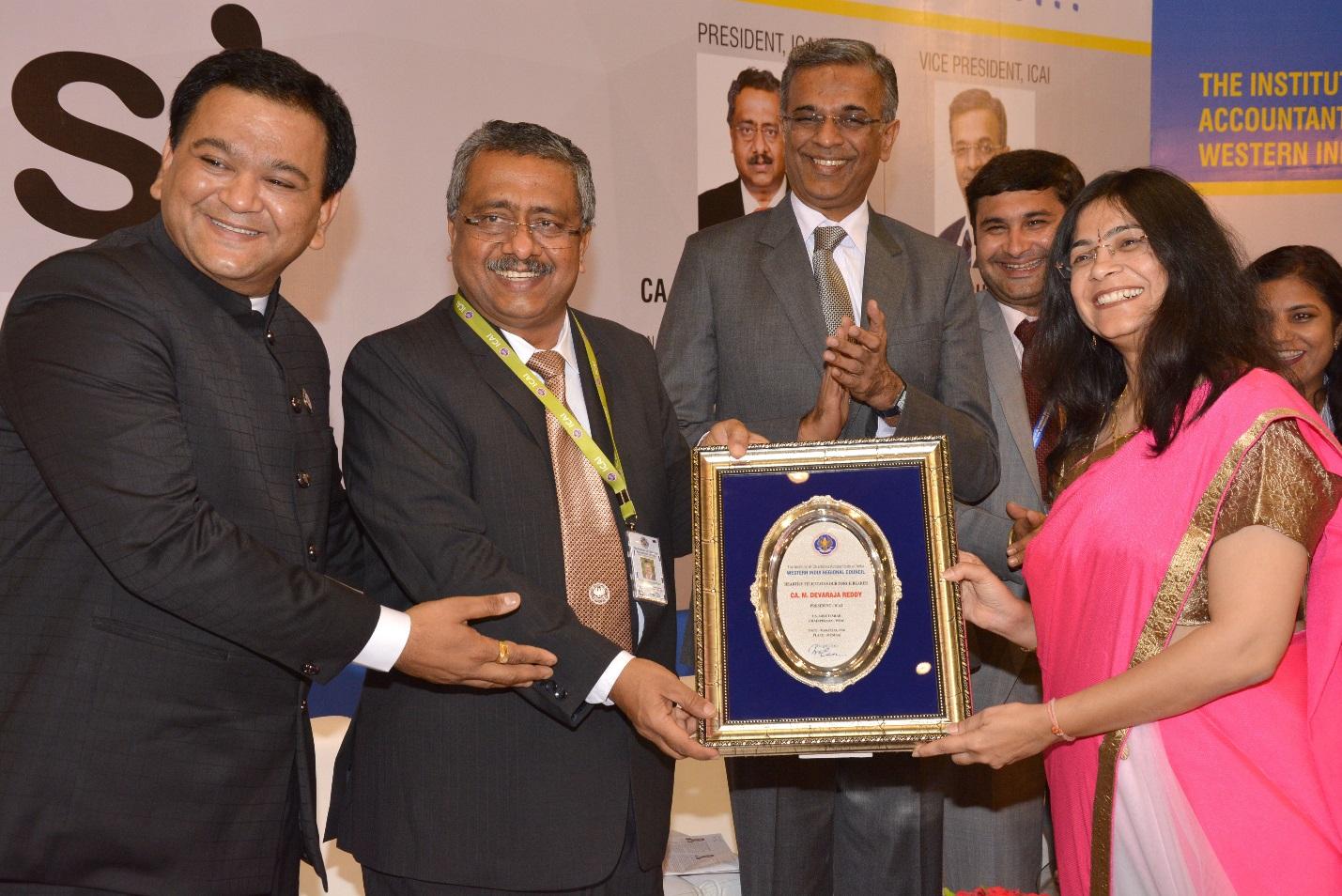 As one of the prominent accounting bodies worldwide, the Institute of Chartered Accountants of India (ICAI) has achieved recognition for its contribution in the fields of education, professional development, maintenance of high accounting, auditing and ethical standards.


Starting with a handful of about 1700 members, today, the strength of Chartered Accountant fraternity has grown to over 2.45 lakh members. On the education front, the ICAI began with mere 259 students and today more than 8.75 lakh active students are a part of ICAI. The ICAI has 5 Regional offices and 153 branches all across the country. The ICAI overseas Chapters continue to spearhead ICAI work program in 27 important jurisdictions globally.


In view of difficulties in smooth implementation of the Companies Act 2013, ICAI is regularly making representations on the issues in the Companies Act 2013 related to the profession. ICAI representations have inspired some of the amendments in the Act such as in Reporting on Fraud by Auditors wherein enabling provisions have been prescribed for thresholds for reporting by auditor to the Central Government.


The Govt. of India constituted The Companies Law Committee (CLC) in June 2015 for making recommendations on the issues arising out of implementation of the Companies Act 2013.


ICAI Acts on SEBI Request over Ind AS Implementation Issues
In response to the Securities Exchange Board of India (SEBI) request to provide suggestions on issues arising out of Ind AS implementation, ICAI has sent the draft of the format for quarterly financial results as prescribed under Clause 41 of Listing Agreement to SEBI. ICAI has also made recommendations to SEBI regarding modifications required in the SEBI’s Issue of Capital and Disclosure Requirements (ICDR) related to financial statements as a result of Ind AS implementation.
New Window of Opportunity for CAs
Opening yet another window of professional opportunity for CAs, the Delhi Assembly has recently passed Delhi School (Verification of Accounts and Refund of Excess Fee) Bill, 2015 besides two other related bills to bring a major reform in education system by amending the 42-year-old Delhi School Education Act, 1973. The Bill will regulate and refund excess fees in private institutions and is aimed at ensuring that private schools show greater accountability in fees accepted and money spent. The State Government will now form a committee which will get accounts of private schools audited through Chartered Accountants. This Bill will achieve its objectives for the good of Delhi education system.
Curbing the Black Money Menace: New Certificate Course
To curb the generation of black money in various sectors, Central Board of Direct Taxes (CBDT), Ministry of Finance, Government of India decided to go all out and conduct workshops which were organized by ICAI to clarify doubts of the assesses regarding scope, procedures etc. of the new legislation namely Black Money (Undisclosed Foreign Income and Assets) and Imposition of Tax Act, 2015.
As part of its efforts to help Government initiatives to curb the generation of the black money and closely work to achieve the objective of Prevention of Money Laundering, ICAI has launched a 6 days Certificate Course on Anti Money Laundering Laws (Anti- Money Laundering Specialist). The objective of the course is to equip CA members in this field with the necessary expertise. Experts from the Enforcement Directorate, Financial Intelligence Unit of India and other regulatory and investigation organizations have been invited to address the members during the Course.
Accounting Reforms in Indian Railways
ICAI has been extending its technical and infrastructural support towards the accounting reforms of various Government offices i.e. moving from cash to accrual system of accounting, after assessing the tremendous positive impact on national financial reporting. The Indian Railway approached ICAI to undertake the pilot study project on “Study of existing Budgeting and Costing System and proposal for Outcome Budgeting and Integrated Cost Accounting Architecture in the line of Indian Budget Announcement 2015-16”. ICAI has undertaken the job & a Concept Paper on Outcome Budgeting has been submitted to the Railway Authorities. The Indian Railway has hosted the Concept Paper on their website for comments.


This is a step forward from Accrual system of accounting. It is a Pilot Project that aims at analyzing the costs & arriving at concrete & scientific data. This would help in better analysis & taking informed decisions.


ICAI has received the letter of Assignment and Commencement for the Project on “Review and Strengthening of Accrual Accounting System and Designing of a Sustainable Audit Management” for MCGM.


ICAI has also taken up the project on “Migration Strategy for Implementation of Accrual Accounting System in EPFO”. The draft report has been submitted.

ICAI has played a very important role in taking Indian financial reporting system to newer heights and achieving international benchmarks by taking necessary initiatives from time to time. Continuing with this endeavour, convergence with IFRS had been decided.


This technical contribution of ICAI is a testimony of what the profession can collectively contribute towards the growth and progress of the country.

The Government had earlier also virtually accepted ICAI recommendations with regard to the roadmap for implementation of Indian Accounting Standards (Ind AS) for companies other than banking companies, insurance companies and NBFCs.


The ICAI had recommended the revised roadmap to the MCA in August 2014. As per the corporate roadmap, in the initial phase of Ind AS becoming mandatory from 1st April, 2016 about 1000 listed/unlisted companies are expected to implement the Ind AS.  This number is likely to increase next year as all remaining listed companies and unlisted companies having networth of more than Rs. 250 crores will get covered in the next year.

Further, not only the professionals involved in the preparation of financial statements as per Ind AS need to have the necessary skill-sets to implement the Ind AS as these require judgment and estimates to be made which were hitherto not required, but auditors also need to upgrade their skills in this regard.

The ICAI has accordingly geared itself on long-term basis to meet the challenges in the implementation of IFRS.


Hon'ble Prime Minister had nominated ICAI for the Swachh Bharat Abhiyaan. Under this banner, Swachh Vidyalaya Abhiyaan had been launched to provide separate toilets for boys and girls in all the Govt. schools throughout the country. The construction of new toilets as well as repairs of dysfunctional toilets has been undertaken by the Central Public Sector Undertakings (CPSUs) governed by the Ministry of Power, Coal, New and Renewable Energy (MoP) and will spend their CSR funds for construction/repair of the said toilets in schools that are having in-adequate toilets.


It has been desired by MoP that the physical outcome of such activities be suitably verified and the services of the Chartered Accountants be availed for this purpose on a pro bono basis. In view of this, ICAI had made an announcement to this effect to its members inviting them to confirm their interest in supporting the aforesaid initiative.


As of date, around 773 members have expressed their interest and confirmed their commitment to the Institute. 116 appointment letters have been issued by the concerned Central Public Sector Undertakings (CPSUs) and 767 toilet blocks are under verification across the country. 699 reports have been received till date.


e-Hearing of ICAI Disciplinary Cases
As part of ICAI’s continuous drive to uphold the credibility, integrity and image of the accountancy profession in India, the regulatory mechanism of ICAI is working assiduously. Disciplinary Directorate of ICAI has been taking disciplinary action against its errant members as per the provisions of the Chartered Accountants (Amendment) Act, 2006 and Rules framed there under.
The technology is aiding all spheres of life. Overcoming the need for physical presence, e-benches have been set up by some of the courts and tribunals where involved parties join and appear from different cities using video conferencing. Following the example, ICAI has also decided to initiate e-hearing for its disciplinary cases very soon. This initiative would help in effective hearing and disposal of disciplinary cases in the Institute across the country reducing the overall cost and time for all concerned.
ICAI has a strong disciplinary mechanism wherein proceedings are initiated and taken to their logical end through a well-defined procedure which maintains the interests of natural justice while ensuring that the guilty are never spared. While law takes its own course, ICAI is committed to ensure justice in all disciplinary cases and thereby upholding the values of Excellence, Independence and Integrity which form the benchmarks of the profession.


Setting up of ICAI Chapter at Auckland and RAK UAE
To establish the footprints and marks of excellence of the Indian CAs across the globe through a strong network of foreign chapters, which presently have more than 12,000 members in their fold, ICAI has established 27 overseas chapters. These chapters prove to be immensely useful for Indian CAs in the region and would network with the members of Accounting Institutes.


ICAI would soon be inaugurating another overseas chapter in RAK UAE.


ICAI in partnership with the Institute of Certified Public Accountants in Ireland (ICPAI) has launched a new Programme to enable the members to access career opportunities across Ireland. ICAI regularly conducts different Placement Programmes for the newly qualified and experienced Chartered Accountants. This is another endeavour  to provide the members an opportunity to work abroad. This programme would enable ICAI members to access career opportunities in Ireland.


1163 members had registered for availing the benefits of this programme. ICAI also endeavors to organise more such programmes in other countries as well. 738 members have been shortlisted in the first level. The quality of the members has been highly appreciated by the prospective Irish employers.


ICAI is organizing Campus Placement February- March 2016 at 22 centres across the country in two phases.
Till date, 5961 candidates have registered for the programme and 100 companies are participating in the programme.
Campus Placement Programme, August-September, 2015 was organized at 19 centers


The ICAI has always been pro-active in designing education and training schemes so as to produce competent professional Chartered Accountants.  The ICAI is aware of the demands of  modern dynamic society and therefore the CA course is regularly updated and revised so that the  students should acquaint themselves with the latest in the fields of accounting, auditing, finance, IT and should remain ahead of times.

Posted by orientpublication at Thursday, March 31, 2016
Email ThisBlogThis!Share to TwitterShare to FacebookShare to Pinterest