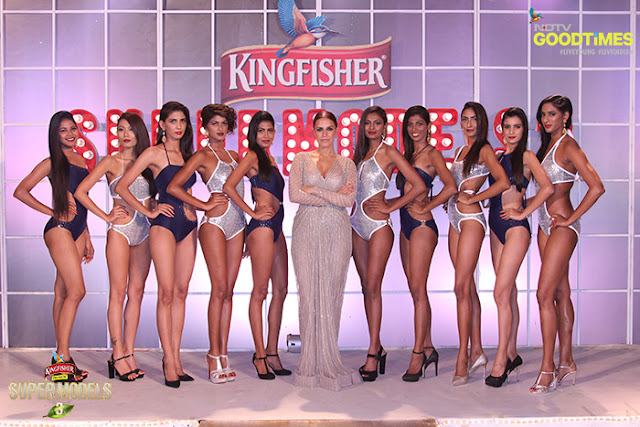 ~Gets direct entry to ‘The Kingfisher Calendar 2016~

NDTV Good Times, India’s youngest lifestyle channel has announced the verdict on the much awaited finale of Kingfisher Supermodels 3. Aishwarya Sushmita who hails from Bihar, is a talented girl with a perfect combination of style and confidence, has won the ultimate crown after a series of challenges on the reality show.

20 Episodes, 10 Tasks, 10 Pool Parties with 1 Task Master – Neha Dhupia; ‘Kingfisher Supermodels 3’ started with 10 girls, different talents and different attitudes, but all with one goal to be the next Calendar Girl. With tough tasks and even tougher judges, these girls didn’t have it easy. The 20 episode series saw models performing exhilarating tasks such as KF Signature Underwater Task, never heard before ‘Confessions of a Supermodel’, photo shoots followed by elimination of one model each week.


An avid singer as well as a belly dancer, Aishwarya Sushmita has done it all. To even cross her check list, she is a national level badminton player. The diva has international looks; she is a perfect combination of style and confidence.
Expressing her excitement, Aishwarya said “Like most of the girls, the glitz, glamour and all the nice things of the industry enticed me to step into the world of modelling. It is a dream come true to have made it as the winner of this year’s Kingfisher Supermodels and be part of the Kingfisher Calendar 2016. I would sincerely like to thank Kingfisher and NDTV Good Times for providing this platform that would bring me recognition.”
Expressing her happiness, judge, mentor and anchor Neha Dhupia said, “Kingfisher Supermodels 3 was a great reality show and it was very challenging to judge these competitive girls on the show. Aishwarya has put in all the efforts that need to be poured into being a model, and I wish her all the success. It's not just Aishwarya but the other models too who will benefit from this platform. I wish them the  very best for the future ahead."
Talking about the success of the show Arati Singh, Channel Head, NDTV Good Times asserted, “Firstly, we would like to congratulate Aishwarya for the stunning victory. We are happy to join hands with our partner Kingfisher to provide this excellent launchpad to make it big in the modelling industry. Every season of Kingfisher Supermodels has surpassed its own standards and we look forward to continue this legacy forward.”
Talking about the show, Samar Singh Sheikhawat, Senior Vice President Marketing, United Breweries Ltd said, “Kingfisher Supermodels has received an overwhelming response from the audiences. With a diverse mix of talents and challenging tasks, the show gets bigger and bolder every season. Neha Dhupia played the perfect host and as a mentor helped groom the supermodel aspirants to take on the demands of being the Kingfisher Calendar girl. Aishwarya has emerged as the winner of Kingfisher Supermodels and will be featured in the Kingfisher Calendar 2016 along with the other models. The Calendar models have done tremendously well in the past and have carved a niche for themselves in the industry. We are confident that Aishwaya will be soon a name to reckon with in the fashion industry.


‘Kingfisher Supermodels’ on NDTV Good Times has contributed in redefining careers of several Indian models such as Ketholeno Kense, Himarsha, Angela Johnson, Nathalia Kaur, amongst many others  who have climbed the peaks of popularity in the world of fashion and films.
Catch the repeat telecast 4th Jan onwards, Mon to Thu 10 pm only on NDTV Good Times!


About NDTV Good Times: NDTV Good Times is the flagship channel of NDTV Lifestyle, which is a part of the NDTV Group. Launched in September 2007, it quickly became India's top-ranked English-language lifestyle television channel - rapidly drawing in its target audience of socially upbeat, well-travelled, cosmopolitan viewers who want to live in style, admire fashion, are adventurous about food and travel and want more out of every moment in life with both back-packing and high flying budgets.

NDTV Good Times presents fresh, original programming that gives its viewers mantras on how to enjoy food both highway and Michelin star, find good health through salsa and yoga, follow fashion on ramps both Indian and global and most of all on how to live life the fullest, no matter where you are. The line-up of shows covers every aspect of the lifestyle genre to portray and cater to an increasingly global India.
With the maturing lifestyle space in India at an inflection point and as pioneers in that space, NDTV Good Times has redefined the lifestyle entertainment category codes once again.

Today, India's oldest lifestyle channel is it’s youngest. With programming that is impulsive, interactive and with an attitude to match. The new logo, icons, indents and a vibrant and dynamic colour palette are a testament to the channel's continuing evolution as India’s premier lifestyle entertainment destination.

The channel tag-line is #LiveYoung#LiveIndian, the only socially integrated tagline in India, which integrates and recognizes social media as a part of the channel's DNA. While it exemplifies what the channel stands for, it is also a call to action, as it exhorts the NDTV Good Times' viewers to live young and live Indian.

NDTV Good Times has won several programming awards at the Indian Television Academy Awards, Indian Telly Awards & World Media Festival for key shows & interstitials like Highway On My Plate, No Big Deal and Making of the Kingfisher Calendar. Judged as the 'Best


Fashion & Lifestyle Channel' at the ITA (Indian Television Academy) Awards for two consecutive years, NDTV Good Times is beamed directly across international markets such as US, Singapore, Sri Lanka, Mauritius and Maldives. The Channel is present across all major analogue cable markets & all six DTH platforms in India.

Posted by orientpublication at Tuesday, December 29, 2015
Email ThisBlogThis!Share to TwitterShare to FacebookShare to Pinterest