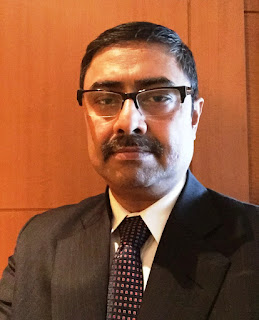 Mumbai, December 20, 2015:- Lakshmi Vilas Bank, one of the fastest growing banks in India, today announced it has received Reserve Bank of India approval for  the appointment of Mr. Parthasarathi Mukherjee as its MD & CEO. He succeeds Mr. Rakesh Sharma, who has joined as MD & CEO of Canara Bank. In its history of more than 85 years, bank has continuously delivered profits and dividend without a gap for its investors.


Mr. Mukherjee brings with him a rich experience of more than 33 years in banking industry. He joins from Axis Bank where he served as Group Executive (Corporate Relationships and International Business). He was heading Axis Bank Treasury at a crucial time when the global markets were passing through the phase of upheaval between 2007 and 2008.


Prior to joining Axis Bank (erstwhile UTI) Mr. Mukherjee has worked with State Bank of India for 12 years. He started his career as a probationary officer in 1982 and has handled responsibilities in various profiles such as large corporate, Treasury, Agriculture, Small Scale Finance, Forex and branch banking. Mr. Mukherjee is aluminums of Presidency College, Kolkata.


Shri Prakash Mallaya, Director, Lakshmi Vilas Bank said “we are very happy to have Mr. Parthasarathi on board and are confident that he will play a key role in the continued growth at Lakshmi Vilas Bank. He brings with him a rich experience in corporate banking and treasury. Banking industry is going through a sea change and Mr. Parthasarathi’s leadership will immensely benefit the institution.
About Lakshmi Vilas Bank:
Incorporated in 1926, Lakshmi Vilas Bank obtained its banking license and became a scheduled commercial bank in 1958. Today it has a national presence serving over 2.67 million customers through its 400 branches, 7 Extension Counters and 820 ATMs, totaling close to 1100 outlets in 16 states and Union territory of Pondicherry. The Bank's asset size as on March 31, 2015 was to the tune of Rs.24,705 crores, as of quarter ended September, 2015 Bank had a total income of Rs.2,498.57 crores. Bank maintained deposits of over Rs.21,964.21 crores as on March 31, 2015. The operating profit for the same year was to the extent of Rs.376.44 crores; its growth rate at 21.83% during the year being one of the highest among peer banks. During the Financial year ended 31.3.2015 the bank made a net profit of Rs. 132.29 crs. Bank offers 6% interest rates on the saving bank account to its customer.

Posted by orientpublication at Tuesday, December 22, 2015
Email ThisBlogThis!Share to TwitterShare to FacebookShare to Pinterest