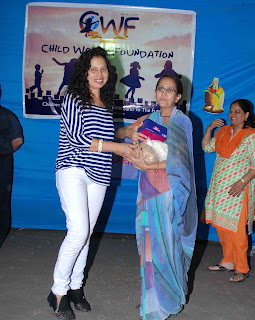 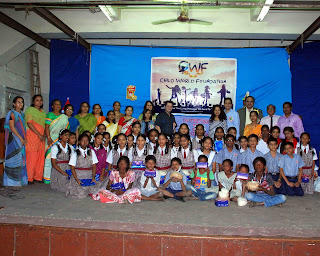 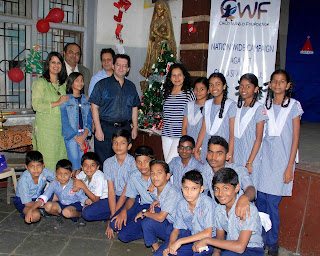 Child World Foundation Event.Project Nutrition for Children.
Child World Foundation Event at Aryan Education Society saw the launch of its Project Nutrition for Children.
With over 100 children in attendance along with the School Trustees and Teachers the event was also graced by luminaries from the Corporate and Diplomatic Services,who were also the Key Speakers for the event,making it a resounding success.
The event kicked of by a Magic Show which mesmerised the children
This was followed by a Welcome Note by Ms Sabrina Cooper,Founder of Child World Foundation,who welcomed and introduced the luminaries,and spoke about the activities and achievements of Child World Foundation in making it a better world for children.
Ms Sabrina emphasised on the 3 basic principles of the Foundation-Protection,Rehabilitation and Education.
This was followed by the Key Speakers :1. Mr Paresh Mehta ,Honorary Consul of the Republic of Nicaragua expressed his happiness to have graced  the occasion and extended support.
2.Mr Vikash Mittersain CMD of Nazara Technologies and Founder President India Business Group was impressed  by the magnanimous work done by Ms Sabrina and also extended support to the Foundation.He enjoyed the Magic Show too.
3.The Trustees of Aryan Education Society expressed their gratitude for the good work  of the Foundation.
Mr Bayri Commercial Attache of Turkey also graced the occasion.
A cultural program staged by the school children was a hit with the audience.
Kiran a lady whose children have been supported by the Foundation struck a poignant note for her gratitude to Ms Sabrina for her philanthropy.
Project Nutrition for Children kickstarted  with the distribution of food grains and snack boxes to  60 children deprived of their parents but living with their relatives.
This will be an ongoing Project of the Foundation with distribution on a monthly basis.
To assist in distribution of food grains , books and snack boxes the luminaries  Mr. Dilip Mehta a business magnate, Mr Deepesh Deshmukh Dean of Global School of Management and Mr Ashdin Kapadia a  senior Rotarian and businessman did the honours.
The event proved that Child World Foundation made its mark in another successful event further strengthening its goal  of making this world a better place for our children our future.
Bravo!!!

Posted by orientpublication at Wednesday, December 30, 2015
Email ThisBlogThis!Share to TwitterShare to FacebookShare to Pinterest