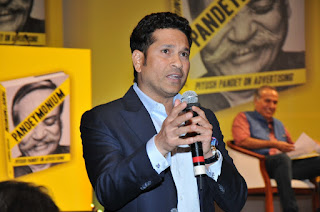 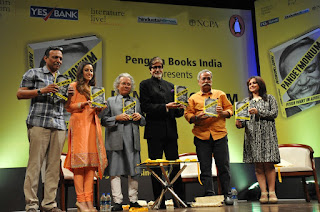 Piyush Pandey, author of PANDEYMONIUM was in conversation with Shri Amitabh Bachchan. During their conversation Mr Bachchan talked about their Polio Campaign that was designed by Piyush Pandey and had a tremendous response from the people. In 2010 India stands as a 100% Polio free nation. Mr Bachchan also talked about his ad campaign that he did for Cadbury with Piyush Pandey that helped the sales of their product (Dairy Milk Chocolate) jump by 70%. Mr Bachchan also read from the preface of the book (attached to the mail). Mr Bachchan congratulated Piyush as the most sort after ad man that this nation has. He also talked about his experience of working with Piyush and how both of them are early morning people.(PICS ATTACHED)

Sachin Tendular, also narrated his experience of working with Piyush Pandey for Luna ad. That was his first TV commercial with Piyush when he was very young. He talked of how he had no idea of how to face a camera then and how he was helped by Piyush’s team.

Short Note on the Book:

What makes Piyush Pandey an extraordinary advertising man, friend, partner and leader of men?
How does he manage to exude childlike enthusiasm, and bring such deep commitment to his work?

You’ve seen most of the things that Piyush Pandey has seen in his life. You’ve seen cobblers, carpenters, cricketers, trains, villages, towns and cities. What makes Piyush different is the perspective from which he views the same things you’ve seen, his ability to store all that he sees into the recesses of his brain and then retrieve them at short notice when he needs to. That ability, combined with his love, passion and understanding of advertising and of consumers, makes him the master storyteller that he is.

In Pandeymonium, Piyush talks about his influences, right from his childhood in Jaipur and being a Ranji cricketer, to his philosophy, failures, and lessons in advertising in particular and life in general. Lucid, inspiring and unputdownable, this memoir gives you an inside peek into the mind and creative genius of the man who defines advertising in India.

Note on the Author:

Piyush Pandey, sixty, is the executive chairman and creative director for Ogilvy & Mather India and South Asia, and the winner of over 800 awards for advertising. Born and raised in Jaipur, Pandey did his schooling from St. Xavier’s School, and obtained his master’s from St. Stephen’s College, Delhi. He is passionate about cricket, having played in the Ranji Trophy, representing Rajasthan. His first job was as a tea taster, before he joined Ogilvy in 1982 as trainee account executive.

Piyush has been named The Most Influential Man in Indian Advertising ten years in a row by theEconomic Times. In 2000, the Ad Club of Mumbai voted his commercial for the adhesive brand Fevikwik The Commercial of the Century, and his work on Cadbury as The Campaign of the Century. He was voted Asia’s Creative Person of the Year at the Media Asia Awards 2002. He is the only Indian to have won a double gold at Cannes and a triple Grand Prize at the London International Awards. Ogilvy India has won over fifty lions at Cannes under his leadership. In 2002, he won India’s first-ever Silver Pencil at The One Show Awards and was named the president of the Jury for Outdoor & Press and Film at the Cannes Lion International Advertising Festival, 2004, which was a first for an Asian. In 2007, Piyush was inducted into the Hall of Fame by the Communication Arts Guild. In 2009, the New York Advertising Festival presented Piyush the prestigious Creative Achievement Award. He was awarded the Lifetime Achievement Award in 2010 by the Advertising Agencies Association of India. In 2012, he became the only Indian to get the Lifetime Achievement Award at the CLIO Awards, New York.

Endorsements for the book:

‘Pandeymonium is perhaps the most definitive book on contemporary Indian advertising ever. It is a must-read for anyone who loves this country, the brands that thrive and the quirky world of advertising. This is a true make-in-India book by a rooted son of the soil.’ Suhel Seth, Author and Marketing Guru

‘This book is vintage Piyush – passionate, straight from the heart and a tell-it-like-it-is account of the many experiences and myriad influences that have shaped the career and life of Indian advertising’s Man of the Match for over two decades.’ Bharat Puri, Managing Director, Pidilite Industries

‘Piyush is full of creative energy, ideas and humour, and this is what is reflected in Pandeymonium. A must-read for people in the consumption and advertising space to learn what desi communication means and how effective it is.’ Kishore Biyani, CEO, Future Group
Posted by orientpublication at Thursday, October 15, 2015
Email ThisBlogThis!Share to TwitterShare to FacebookShare to Pinterest