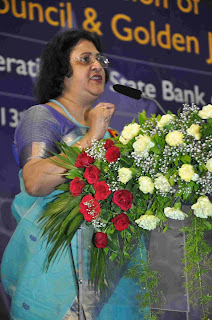 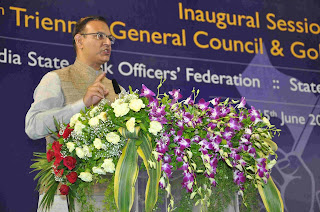 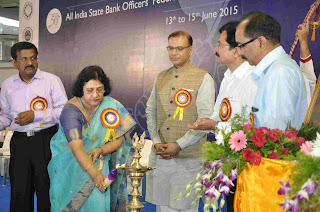 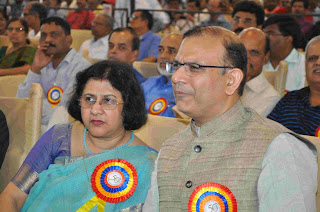 Focusing on the current economic scenario and comparing it with the ongoing journey of development Hon. Shri. Jayant Sinha, Minister of State for Finance, Government of India, said, “The train of development which we inherited was a derailed one and we have put it back on track. We have made the passenger train into a Rajdhani Express and in some time, we will convert it into a bullet train. The economy that the current government inherited had toxic macro-economic parameters and the present government is trying to change those parameters. The Indian economy today is a USD 2 trillion economy. All the actions that our government is taking will enable us to be able to get on the path of sustainable growth of 7 percent, 8 percent or 9 percent, and if we are able to sustain this growth rate... For a decade... Our USD 2 trillion economy will become USD 4 trillion or 5 trillion economy, making us the third largest economy in absolute terms."

"The US economy is estimated to be worth USD 17 trillion economy while the Chinese economy has a size of about USD 10 trillion. In terms of Purchasing Power Parity at USD 4-5 trillion, India will be USD 17-18 trillion economy," he added.

"Because we got the fiscal deficit and inflations under control, RBI has now got the monetary space to be able to cut rates, which implies that we are going to get the benefits of the cycle of interest rate coming down," Sinha said at the inauguration ceremony of Golden Jubilee Celebration of All India State Bank Officers' Federation.

Shri. Sinha also added, "looking at the present level of inflation, the fiscal deficit, the current account deficit and the GDP growth; the observers around the world, whether from OECD, or from the World Bank or IMF are now saying that the Indian economy is in good health."

Revealing future plans about the SBI, Chairman, State Bank of India Smt. Arundhati Bhattacharya said, “SBI is one of the top leading banks in the country and to maintain its reputation is our sole responsibility. Our bank is instrumental in providing all possible services to each category in the society and we all should make an effort to maintain this tradition.”

While commenting on the waiving off processing fees, in case customer shifts his home loan to SBI, Smt. Bhattacharya said, "the bank is trying to increase its market share through this offer. We are expecting a good response for this offer,”

When asked about whether there was any discussion over the recapitalisation, in yesterday’s meeting between PSU bank chiefs and Finance Minister Arun Jaitley, she said the minister has assured of more capital.

Smt. Bhattacharya also added that, “The Finance Minister said that the demand which banks have made for more capital has some basis. When the economy is looking to grow, we need growth capital. The growth capital is not much available as we today have regulatory capital,”

She claimed that SBI has not sought any funds from the government in this fiscal year so far.

The Federation, on its part, has cautioned against implementing various recommendations of the P J Nayak committee on bank governance and wants the state-owned character of the Bank to continue.

Federation’s General Secretary Y Sudarshan said, “We are also cautious about the recommendations of P. J. Nayak Committee, which aims at a dilution of control of the government and participation of private sector in managing regulation of PSBs,”

“We firmly believe in the continuation of the ownership by public sector banks in the country.”

Shri. Sudarshan also made a reference to a the report of Narasimhan committee vis-a-vis privatisation of public sector banks and the successful opposition to it.

The Federation has been conducting a number of social service activities in coordination with the Circle Associations and also has established educational Institution, Co-operative Credit Societies, Co-operative stores and housing project for the members.The Federation has more than 90,000 employees as its members from SBI and five associate banks as well.

Over 5000 members, including delegates and observers, senior veterans, several serving leaders from all the affiliates along with hundreds of members from the branches of Mumbai Circle attended the Inaugural Session of the General Council and were enlightened by the deliberations of the dignitaries.
Posted by orientpublication at Wednesday, June 17, 2015
Email ThisBlogThis!Share to TwitterShare to FacebookShare to Pinterest