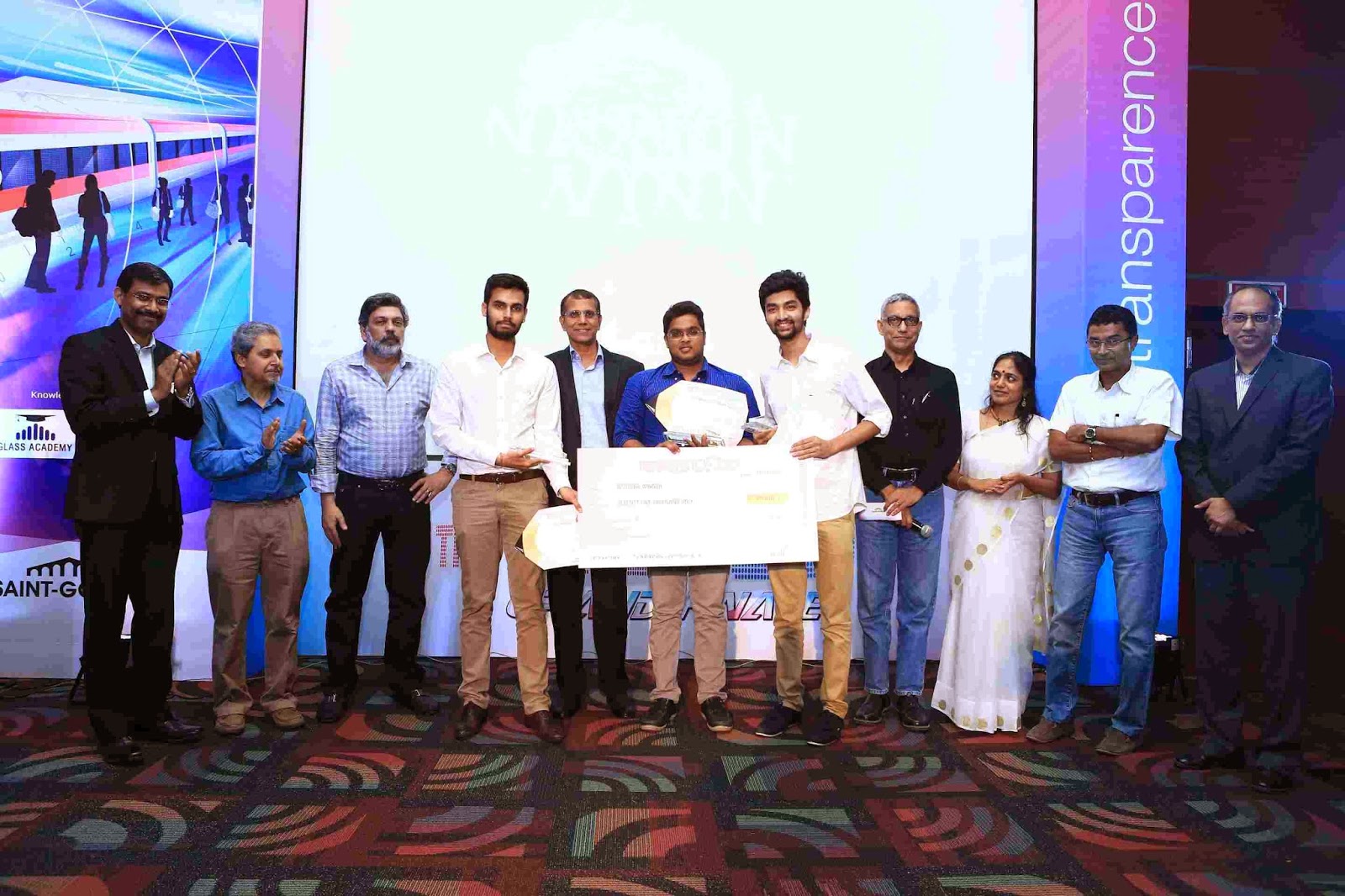 Saint-Gobain Glass's Transparence 2014, the annual design competition held for students of Architecture and Design, conducted its 9th edition’s Grand Finale in Chennai on 27th February, 2015 at Hindustan University.
Transparence, India’s largest competition for students of architecture and Interior design is a unique initiative by Saint-Gobain Glass to integrate the student community, architects and the industry. The event is supported by Ms. Gita Balakrishnan run ‘Ethos’. The competition originally being held for Indian students since 2005 was made open for the SAARC nations to participate since 2013.
Held at the Jubilee Auditorium at the Hindustan University, and judged by an eminent jury comprising of Ar. Sanjay Kanvinde from Kanvinde Rai and Chaudhary Associates, Ar. Sohrab Dalal from DPA Design Plus and Ar. Rohit Saxena from Perkins Eastman, the fiercely contested competition saw SPA Bhopal, comprising of Swadheet Chaturvedi, Vipul Jain and Aditya Singh emerge as the undisputed winners and walking away with a cash prize of …INR 75,000/-. The National Runner Up I was from IPS Academy of Architecture, Indore comprising of Prasanna Purohit, Supriya Dongre and Gaurav Suryavanshi which bagged a cash prize of INR 50,000 and Vishus Narayan, Fidal Roshi and Varghese M Cherian of SPA, Vijayawada stood third nationally with a cash award of INR 25,000/- BUET, Bangladesh won the SAARC edition of Transparence.

Theme: Social Housing
Social Housing (Affordable housing) is a necessity in India. The Government of India has planned a “Housing for all by 2022” program. In addition the Government has also actively mooted the Smart City concept which involves building 100 new smart cities by 2035. While these smart cities are envisaged to have better facilities, better connectivity and better environment, it will also include a strong focus on Social housing.
Thus the theme will be topical and relevant

Mentor: Ar. Ravi Sarangan
Ravi Sarangan is the co-founder of one of the leading Design firms to emerge from India- EDIFICE. 23 years ago, the firm starting with Corporate and Residential interiors metamorphosed into a full scale design house being counted today amongst India’s top three Design houses. Today Edifice has a presence in the following sectors:
 Urban Planning, Housing, Hospitality, Health Care, Retail, Commercial, Education, Industrial, IT/ ITES

13 colleges took up the theme of Transparence 2014 as studio projects and were awarded books worth INR 30,000 per college as aid.

Reaching out to a larger set of students on the sidelines of the Grand Finale the day comprised of a workshop on Architecture for Smart Cities conducted by Ar. Oscar and a Glass Academy certified workshop which was followed by a Panel Discussion. The panel had eminent architects like Padma Shri C.N. Raghvendran, Ar. Rohit Saxena, Ar. Sanjay Kanvinde, Ar. Ravi Sarangan and Ar. Sohrab Dalal talking about “My Future as an Architect”. The Grand Finale was conducted post lunch followed by the glittering award ceremony. All this was backed by a special announcement- The Saint-Gobain Scholarship Program 2015 of INR 1, 00, 000 each, for students of Architecture and Interior Design was announced at the event.

The frenzy that comes with every edition of Transparence is to be seen to be believed and this year's edition too, lived up to it. The enthusiastic excitement of close to 1000 students from various colleges egged the finalists on, as the event reached a crescendo.

Speaking on the occasion, Mr. R Subramanian, Managing Director Saint-Gobain India Pvt. Ltd. Glass and Solutions said “Transparence is Saint-Gobain’s innovative response to the changing times – the use of glass as a sustainable material for design is testimony to this. Transparence has always aimed to inspire and motivate the student community to showcase their talent and Transparence 2014 this year, has been a resounding success and I am sure Transparence 2015 will be bigger than ever as it reaches its 10th edition, coinciding with 350 Years Celebrations of Saint-Gobain.
Mr. B Santhanam, President Flat Glass South Asia, Malaysia and Egypt said “This year too Transparence travelled across Indian borders and was open to the SAARC countries like Pakistan, Bangladesh and Sri Lanka. We are happy to take this spirit which has ignited the passion of the Indian students of architecture to the students of other countries as well.
He also mentioned that “It is great to witness the budding young architects and designers coming out with fresh and innovative ideas for the industry. This is a big opportunity for students to develop their skills. The overwhelming response from India and the SAARC countries has reinforced our belief that creative young minds need a platform like Transparence to showcase their talent and we will continue to provide this kind of encouragement to the student community.”

About Transparence
"Transparence - Design Competition for the students of Architecture and Interior design" was launched in the year 2005 as a means of providing today's budding architects an opportunity to demonstrate their designing prowess and identify their latent potential. It is conducted as an annual event consisting of regional rounds and a Grand finale. Eminent architects play the role of jury members for judging the most coveted title. Today, Transparence is considered a movement in its own right, by students and the architectural fraternity as well.

Saint-Gobain Glass India, a subsidiary of Compagnie de Saint-Gobain, manufactures and markets a wide variety of flat glass products and solutions. It started operations in the year 2000 with the commissioning of its first float glass plant. Since then it has rapidly expanded and deepened its presence in the Indian Flat Glass Market. Today, Saint-Gobain is a leading player in the float glass industry with a strong brand, a wide range of products and solutions and a pan-India manufacturing footprint (Tamil Nadu, Gujarat and Rajasthan). Saint-Gobain pioneered several products, marketing and manufacturing innovations that helped in the emergence of product differentiation and segmentation in what was seen till recently as a Commodity industry.

In 2015, Saint-Gobain is celebrating its 350th anniversary, 350 reasons to believe in the future.
Backed by its experience and its capacity to continuously innovate, Saint-Gobain, the world leader in the habitat and construction market, designs, manufactures and distributes high-performance and building materials providing innovative solutions to the challenges of growth, energy efficiency and environmental protection. With 2013 sales of €42 billion, Saint-Gobain operates in 64 countries and has nearly 190,000 employees. For more information about Saint-Gobain, visit www.saint-gobain.com and the twitter account @saintgobain.
Posted by orientpublication at Tuesday, March 03, 2015