Whisper Empowers Millions of Indian Women
To Break free from Period Taboos to be Unstoppable! 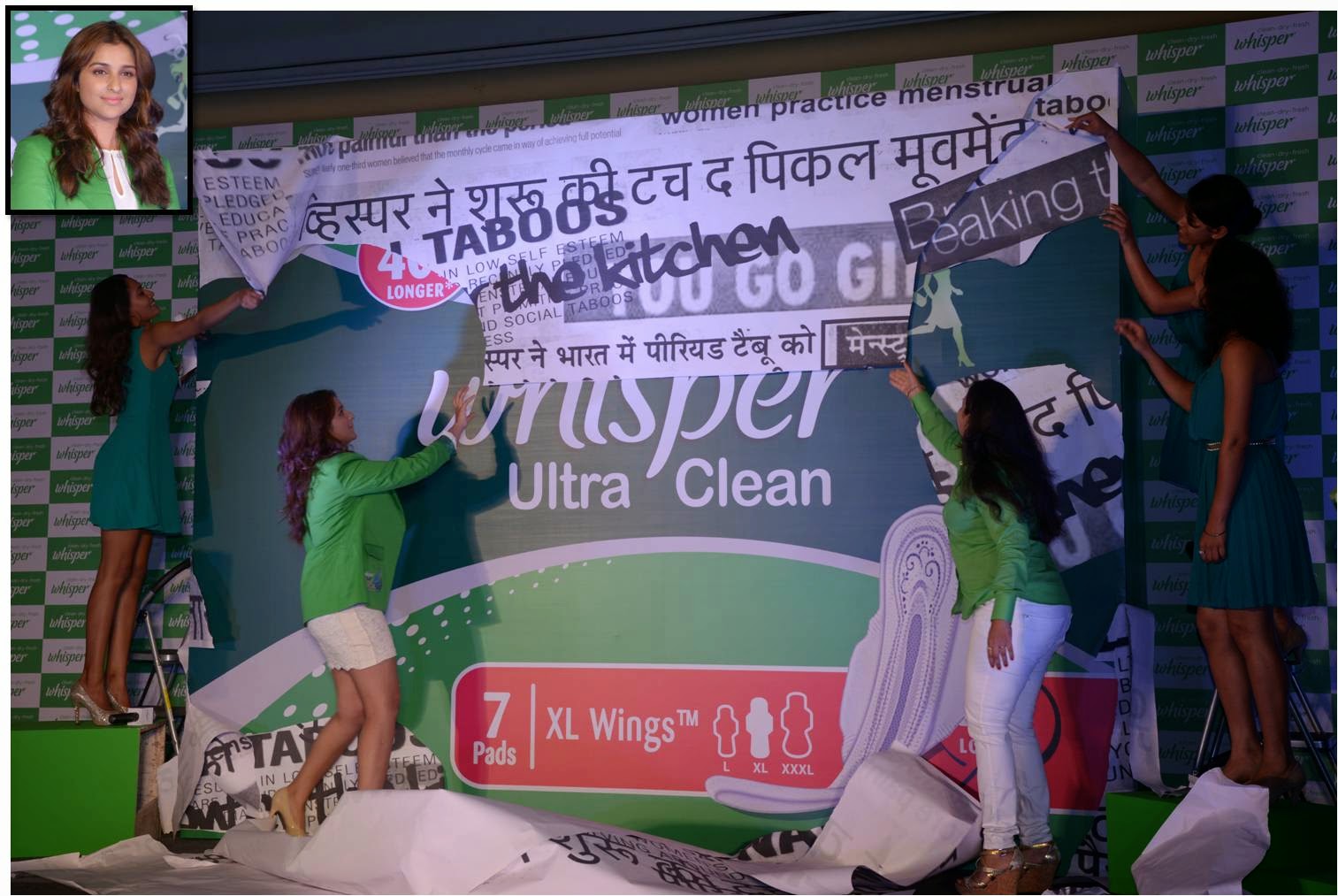 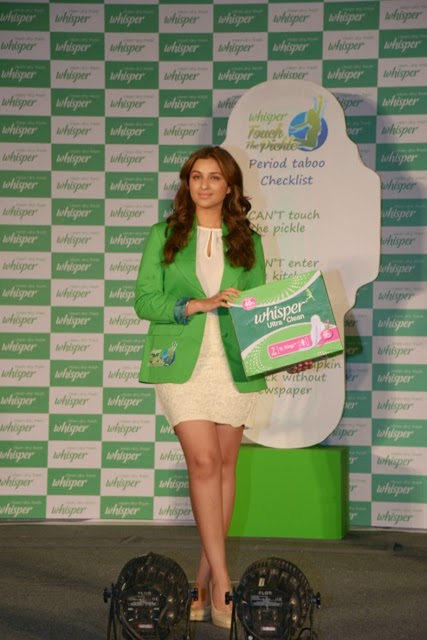 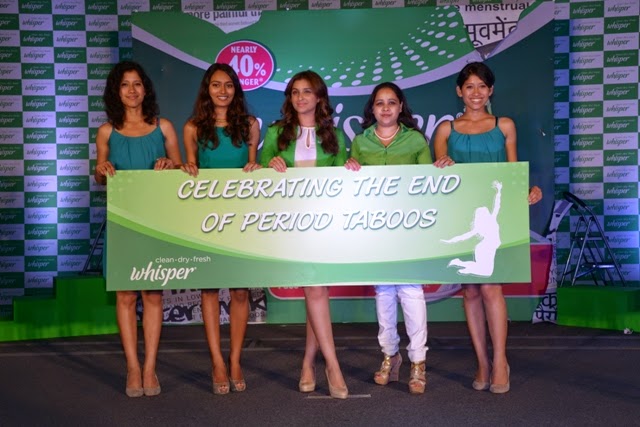 Mumbai, August 12th, 2014: Leading Sanitary brand Whisper celebrated its ‘Touch the Pickle Movement’, now a nationwide movement to enable women to break free from period taboos and achieve their dreams. Held in Mumbai, the event featured Bollywood Actress Parineeti Chopra along with eminent women achievers from diverse fields to tear open a giant newspaper covering a sanitary napkin packet, symbolizing the breaking of one of the biggest taboos – to hide sanitary napkin packets in a black bag or newspaper.
Filled with insightful research findings, interactions with women achievers and more, the movement conveyed significant, life-changing messages about period taboos. Joining Bollywood diva Parineeti Chopra in representing the taboo-free Indian woman were Ishita Malviya, India’s First professional female Surfer; Tashi and Nungshi Malik, first twin sisters who hold a record for climbing Mt Everest; and Indira Gandhi National Award winning Commercial Pilot Captain Priti Singh. Stepping forward as role models in being unstoppable and realising dreams, these influencers stressed upon the need to leave aside ridiculous period taboos imposed by our society.
Earlier in the movement, Whisper, along with independent researcher IPSOS, had shared findings of an extensive research on period habits among urban and semi-urban Indian women. These results were shared through insightful articles and interactions featuring women achievers such as Kalki Koechlin, Shraddha Kapoor, Neha Dhupia, Mandira Bedi, Tanvi Azmi, Dr. Suneela Garg and Aditi Gupta, founder menstrupedia.com who also came together to discuss irrelevant social practices around menstruation like women not being allowed to touch the pickle, or to exercise, wear white clothes, wash hair, venture out or even mention the word ‘period’ out loud.
Based on survey findings that ‘86% of women agree that they should learn to talk openly about menstruation’ and ‘83% of women don’t think period taboos should come in the way of one’s career’, Whisper realized the need to empower women enabling them to be achievers. Through the movement, Whisper has started the journey to positively impact the lives of millions of women, to break taboos and inspire confidence.
Instilling confidence in millions of women across India, Whisper has empowered them to break away from irrelevant social practices around menstruation and has successfully driven the movement of encouraging women to touch the pickle, to exercise, to wear white clothes, to wash hair, to venture out and to proudly mention the word ‘period’ out loud! This can be seen from the tremendous response the movement has got from women sharing their personal stories of breaking period taboos, pledging to defy period taboos online and sharing the message to create more awareness.
Known for her chirpy persona and confidence, actor Parineeti Chopra stressed upon the need for women in India to realize their dreams and be unstoppable in life, saying “Some of these period taboos came as a shock to me especially one of women not touching the pickle during their menses. If women like you and me actually followed these taboos, do you think we would have followed our dreams today! I remember how the shopkeeper first wrapped My Whisper packet in a newspaper and then placed it in a black plastic bag out of embarrassment! I don’t remember seeing anybody holding a sanitary napkin packet out in the public. I could never fathom why! I think it is high time women broke away from these period taboos and kudos to Whisper for bringing us together and tearing open the newspaper as a symbol of us breaking away from these senseless period taboos and enabling us to be unstoppable. We need to remember when you have a sanitary napkin like Whisper Ultra that gives you All day long protection , you can just follow your dreams and be Unstoppable’’
Surfer Ishita Malviya reflected on her own success, saying, “I wouldn't have been able to be who I am today if I had paid heed to these period taboos. It’s critical we question and ultimately break some of our own mindsets. I surf even when I have my period, High Seas don’t hold me back neither should periods ‘’
Twin mountaineers, Nungshi and Tashi also supported the cause by adding, “To us, climbing mountains is an affirmation of our long held belief of dreaming big and achieving it. Our love for what we do was born out of the juxtaposition of our love for mountaineering and our desire to fight for the cause of the Indian girl child; hence we deeply support this cause of breaking taboos and are proud to be associated with it! We didn’t ever think of taking a break for those 4 days during our expedition just because we had our periods. With Whisper’s protection we are Unstoppable ‘’
Captain Priti Singh spoke of her commitment adding, “I strongly believe that I would have not been able to achieve my dream of flying had I been restricted by these irrelevant societal taboos. I am glad that women today are breaking stereotypes and jumping leaps and bounds in their careers. I believe breaking away from this backward mindset will only add confidence in realizing their dreams.”
Whisper’s movement intends to take the message further, by committing to educate 15 million girls on menstrual issues by the end of 2017.

About Touch the Pickle Movement
Indian women in the 21st century still adhere to primitive practices of women’s health and hygiene. Menstrual unawareness leads to unhygienic practices, social taboos and low self esteem among girls. When girls are on their periods, they are often imposed with a list of restrictions: Don't exercise, Hide your purchase of sanitary napkins, Don't wear white clothes, Don’t say the word ‘period’ out loud, Don't wash your hair, Don’t venture out and so on.

Contrary to these age-old beliefs, growing whispers on the street say that these restrictions are no longer needed. It’s about time women broke free from these taboos. You know that you're perfectly capable of doing everything you could have done on a normal day, then why let age old myths hold you back?
The genesis of these taboos happened years ago, due to a lack of proper sanitary solutions, and has been passed on from over generations of women; they have no significance in today’s world with superior technology in sanitary pads such as Whisper.
Through this movement, Whisper is enabling women to break free from these taboos to be unstoppable by achieving their goals and chasing their dreams.

Visit http://www.pg-India.com for the latest updates and in-depth information about P&G India and its brands.
Join the Whisper #TouchThePickle movement to announce the end of period taboos on https://www.facebook.com/YouGoGirlIndia;
https://twitter.com/WhisperIndia and
https://www.youtube.com/user/WhisperIndia
*Based on a study carried out by Ipsos Research Pvt Ltd among 1105 women and 202 men in June 2014 across 10 cities
Posted by orientpublication at Tuesday, August 12, 2014