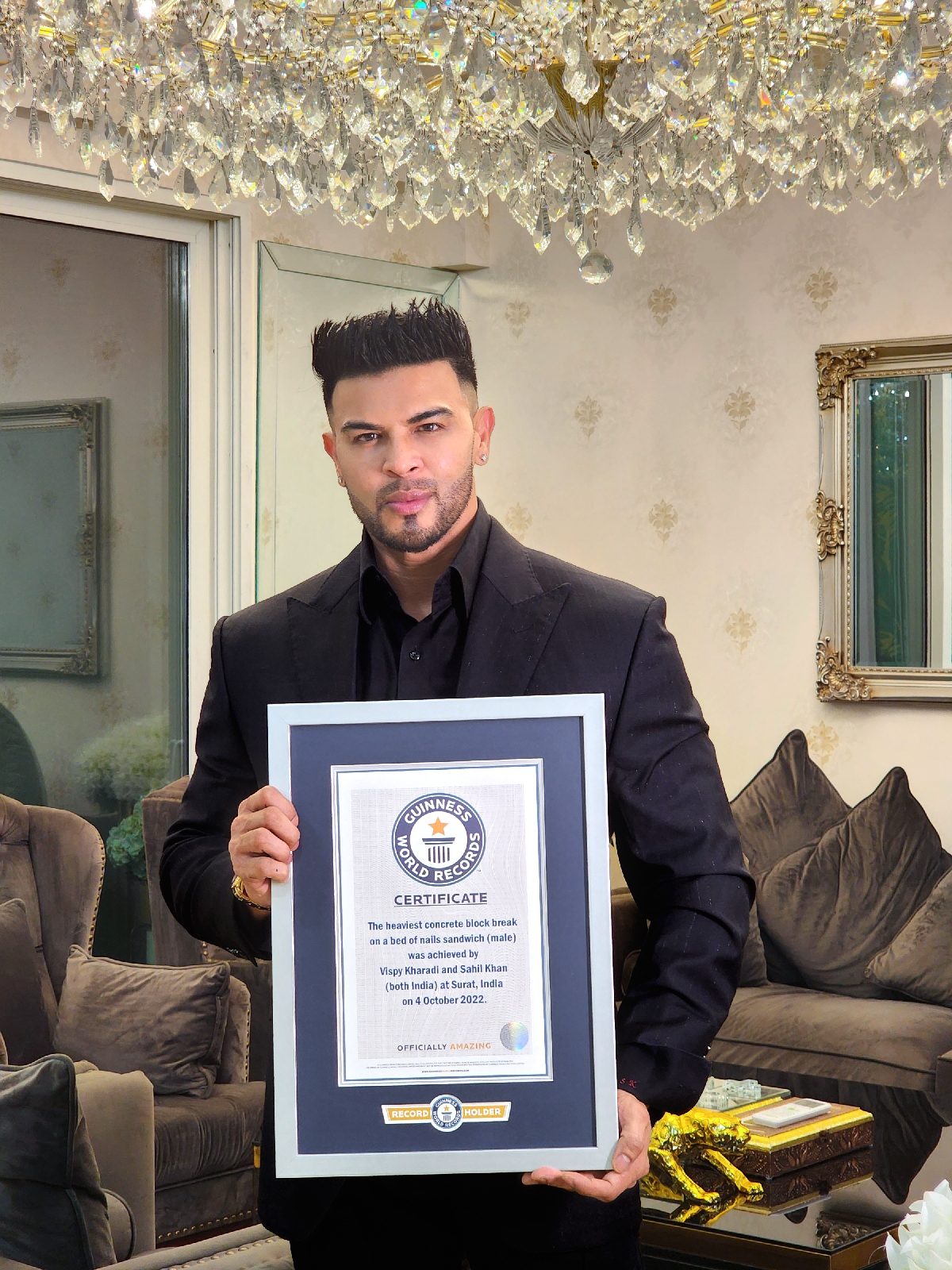 Sahil Khan has had many feats in his glorious career. And now, the youth and fitness icon has entered the Guinness World Record. He, along with the well-known martial arts expert Vispy Kharadi, performed a dangerous stunt together in Surat on October 4, 2022. As part of this stunt, Vispy put himself between two huge concrete blocks, embedded with nails. Sahil wielded a hamper and broke the upper block, wowing the audiences and the world at large. It was a 525 kg block that was broken by Sahil Khan and thus he proved that nothing is impossible in this world.
Sahil Khan started his career as an actor and his first appearance was in the music video, ‘Nachange Saari Raat’. He debuted in Bollywood with the comic caper, Style (2001). It emerged as a huge success and was patronized highly by the youth. Since it was a huge hit, the makers made a sequel, Xcuse Me (2003), which also starred Sahil.
Sahil Khan has won numerous awards in the field of fitness. He also has his own YouTube channel, wherein he shares fitness tips. These videos have a huge fan following and it’s no wonder that he has amassed more than 2.8 million subscribers. He’s equally popular on Instagram and this can be judged by the fact that he has 11 million followers on the photo and video-sharing site.
And that’s not all. The multi-talented personality is also an entrepreneur. He is associated with the water brand Hunk Water. He's also a partner in MyFitness, a peanut butter brand, The Lion Book, India's number 1 sports-trading platform and the supplement brands Divine Nutrition and Buyceps.
As expected, Sahil Khan is on cloud nine. He said, “I am so glad we were able to achieve this feat. It was hard to crack but we did not lose hope. We were confident of making it to the Guinness World Record and we succeeded. The idea behind doing these stunts is not just personal satisfaction but also to encourage the youth as it’ll ultimately help in making our country proud.”
He continued, “I started my journey as an actor and I got a lot of love from my fans. But today, the kind of admiration that I’ve been getting for being a fitness icon is incredible. On a daily basis, I am flooded with messages from people thanking me for shaping their lives better. Every night, I sleep with utmost satisfaction since I know that it’s because of me and my efforts that millions of people are living healthy life. I would also like to thank God and I hope to continue on my mission of making India fit and strong!”
Posted by orientpublication at Wednesday, November 02, 2022
Email ThisBlogThis!Share to TwitterShare to FacebookShare to Pinterest