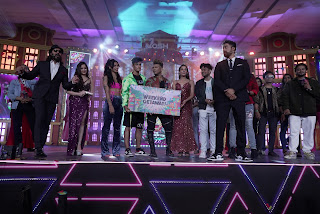 The grand finale was graced by some of Bollywood’s biggest celebrities and Indian influencers namely Sonu Sood, Harnaaz Kaur Sandhu, Vivek Oberoi and many more

Spanning the course of a month, Josh WAKAO was centered around the passion and energy that fueled one’s craft and encouraged users to unleash their WAKAO. The festival witnessed participation from across the country in genres such as fashion, dance, fitness, entertainment, and food. The top 10 finalists under each genre competed against each other at the grand finale. The teams were led by famous Josh influencers such as Eshan Masih, Sana Sultan, Faiz Baloch, Hasnain and Adnaan. Team Eshan emerged as the winning team from which the following five were declared winners from their respective genres:

“Josh WAKAO is a one-of-a-kind influencer festival that recognizes influencers and showcases one’s passion and creativity for their craft. I congratulate the winners who brought their A game to this game show format that we call JOSHWAKAO. At Josh, we are committed to building experiences and providing the right opportunity that celebrates Bharat’s vast and diverse influencer community and we strive to create compelling formats that are exciting and innovative. With properties like Josh Wakao, we strive to remain ahead of the curve in enriching the potential of creators while ensuring a full on entertaining, creator centric experience for our audiences.” said Seher Bedi, Head of Josh Studios, at the event.

“I would like to congratulate all the Josh WAKAO participants for putting up such a great show. All the participants have displayed so much passion and dedication and it was a privilege to guide and mentor the talent that each of them showcased. I would also like to thank the team at Josh for providing a platform that recognises creators across the country and supports and encourages them to move beyond”, said Sonu Sood.

Harnaaz Kaur Sandhu, who very recently got associated with Josh was thrilled to be a part of her first Josh event. “The passion and the dedication displayed by each of the creators is truly admirable and I congratulate the winners for their spectacular content. Being a part of Josh WAKAO has been an honor and a wonderful experience! I thank the Josh team for giving me the opportunity to be associated with this festival, and would like to congratulate them for putting together this amazing platform to support the young talent in our country”, said Harnaaz Sandhu.

Posted by orientpublication at Friday, April 01, 2022
Email ThisBlogThis!Share to TwitterShare to FacebookShare to Pinterest