Mukul Madhav Foundation comes to the aid of boatmen in Varanasi 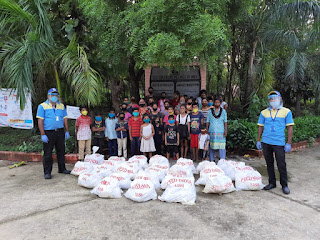 Pune, 21st July 2020:  The economic hardship induced by the lockdown has left the boatmen living in Aasi Ghat, Varanasi with no source of income. Their misery has been compounded with the onset of monsoon as they cannot venture into the Ganga. The timely intervention of the Mukul Madhav Foundation (MMF), and Finolex Industries to provide them with grocery kits helped them overcome a humanitarian crisis.

MMF has collaborated with Vikas Khanna, Michelin Master Chef and Feed India Initiative to support these communities in Varanasi. For those living on the banks of the Aasi Ghat, tourism is the mainstay and the lockdown robbed them of their livelihood as they were not allowed to venture into the river at a time when it’s their main season before the onset of monsoon.

The Foundation stepped forward to support not only 700 boatman families but also Widows, transgender and physically challenged who have been left helpless during the crisis. A cumulative of 2000 grocery kits were distributed in the presence of Nikhil Zanvar Mushtaque Ali, ex Indian Football team captain Lalit Upadhyay, Indian Men's Hockey team player Vinod Singh, Director of Sheat Engg College.

Over the last 4 months, FIL and MMF have been providing grocery kits to daily wage workers, slum dwellers, rag pickers, migrants, transgender communities, sex workers primarily in Maharashtra and a pan India effort to support the plumber community. MMF was at the forefront to assist those affected in West Bengal by the Amphan Cyclone.  A total of 80,000 people have been supported by the Foundation so far thanks to the support received from like-minded individuals, donors and partner organizations.

Posted by orientpublication at Tuesday, July 21, 2020
Email ThisBlogThis!Share to TwitterShare to FacebookShare to Pinterest
Labels: #CommonThread