Sonic brings to kids its version of the popular movie franchise Golmaal with the all new animated show - Golmaal Jr. 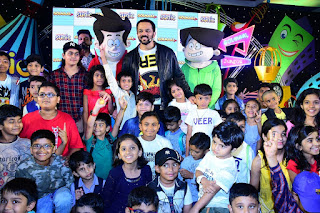 Get set to enjoy the show on SONIC starting 13th May at 1.30pm

May 10, 2019, Mumbai: Claps, Chuckles and Cheers – the launch of 2019’s biggest kids show couldn’t have got grander! The channel Sonic, from the Nickelodeon franchise in association with Reliance Animation and Rohit Shetty Picturez created the 8th IP of the franchise and will recreate the magic of the iconic Golmaal movies through a fun animated series that will entertain kids starting May 13 at 1:30 PM on SONIC. From Rohit Shetty making his way on the stage to the pranksters Gopal and Madhav’s grand entry on hover boards, to them posing on tandem bikes, the launch of Golmaal Jr made for an evening to remember.

Further strengthening the legacy of the Golmaal movie franchise, Golmaal Jr. is an animated series that recreates the comic chaos of the film by pittingtwo prank gangs against each other. Notorious, mischievous and full of life, these two groups are poles apart. Much like their original counterparts, juniorGopal, Madhav, Laxman and Lucky are a bunch of pranksters, expert in creating havoc owing to their never-ending quarrels. As their banters evolve through funny situations, the fantastic five promise to entertain the young audience and ensure they have the time of their lives.

Speaking about the success of the homegrown characters, Nina Elavia Jaipuria, Head – Hindi Mass Entertainment and the Kids TV Network at Viacom18 said “Understanding of kids, their choices and their diverse entertainment needs has been central to Nickelodeon. We have hence always introduced characters that are relatable, engaging and clutter breaking. The new show Golmaal Jr. on Sonic is set to bring further diversity and scale to the wide content library of Nickelodeon.”

Commenting on the association with the brand Ace filmmaker, Rohit Shetty said, “The Golmaal franchise is very close to my heart. The film has already been popular amongst the family audience and now the PRANK GANG- Gopal, Madhav, Laxman and Lucky are all set to entertain children on Sonic with the Golmaal Jr. animated series. The concept of Golmaal Jr. had been in place for a while and I’m very excited about the partnership with Sonic, to bring this high decibel concept and show to life. Each character and their traits are so carefully crafted that I’m confident kids will love the Golmaal Jr PrankGang.

Get ready to get on board the laugh riot and experience the legendary face-off between Gopal and Madhav with the Golmaal Jr. prank gang which is all set to come to life on SONIC starting 13th May at 1.30pm!
Posted by orientpublication at Saturday, May 11, 2019
Email ThisBlogThis!Share to TwitterShare to FacebookShare to Pinterest