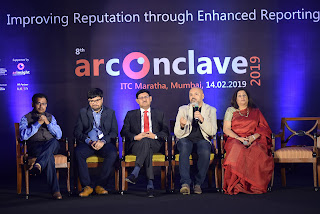 Mumbai, February 18, 2019- The 8th edition of the AR (Annual Report) Conclave, a signature event by AR Insight & ReportInsights took place at India’s commercial capital – Mumbai on 14th February 2019. The conclave witnessed the convergence of 200+ corporate reporting authorities and enthusiasts at a day-long event, that concluded with the launch of the world’s first ever coffee table book on annual reports, #trendsetters. The event was split into two parts, day-deliberation and evening-celebration.

Delivering the opening remarks, Chief Guest - Nilesh Shah, Managing Director of Kotak Mahindra AMC (Asset Management Company) said, “As a community we need to come together, the accountants, the auditors, the rating agents, the investors and the regulators where we have appropriate standards, appropriate governing mechanisms and appropriate punishments. I look forward to this conclave spreading awareness on truthful corporate reporting and we could usher in an era where all the accounting balance sheets can be trusted at their face value.”
Two highlights of the daylong conference were ‘Crystal Gazing Annual Report 2024’, where the panelist emphasized the role of storytelling, innovation and digital content curation to make future annual reports more engaging, crisp and objective; and ‘Business Case of Sustainability Reporting’, the session that emphasized the need for integrating environmental and social performance of a company along with its financial performance. 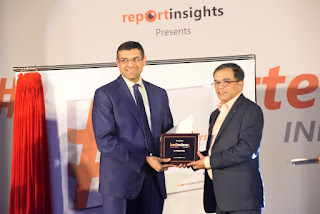 Evening-celebration: The second part of the conclave started on a much fashionable note with the launch of world’s first ever Coffee Table Book on Annual Reports, #trendsetters. The Coffee Table Book celebrates the trendiest annual reports released by Indian companies between a five-year period of 2014 and 2018. A visual treat that has been curated from a seemingly as mundane and uninspiring corporate document called annual report presents creative masterstrokes that Indian annual report designers and writers have delivered against all odds. #trendsetters acknowledges top-100 Indian companies for trendiness of their annual reports. Mid-cap and small-cap companies outsmart their large-cap counterparts in this unique list, highlighting their extra efforts in weaving extra stickiness and engagement value in their annual reports.

Unveiling the coffee table book, #trendsetters, Indian Annual Reports: 2014 -2018, evening session Chief Guest- Dr. Mukund Rajan said, “It is a new concept and I am delighted to be a part of such an innovation. AR Conclave has managed to revolutionize itself and the reporting world each passing year.”
Elaborating on the vast subject of the conclave Mr. Rajan also shared his views on ESG (Environment, Social and Governance), “Looking at the ESG what we noted was the need and opportunity for higher ESG standard in India is enormous. We constitute around 18% of the world’s population and are one of the most important geographies for the fulfillment of United Nations Sustainable Goals. We need new focus on ESG to offer a new and much needed mantra for sustainable investing and better returns for our investors. We have taken around 20 trillion dollars of funds that are backing an ESG approach. It is one of the fastest growing equity and there is strong and growing research that demonstrates strong correlation between ESG investment and good returns for investors.”
Expressing his gratitude on successful staging of 8th AR Conclave, CEO – AR Insight cum Managing Editor – ReportInsights, Mr. Pravin K Ujjain said, “What is heartening to note is that AR Insight has created an aspirational industry benchmark by instituting the AR Conclave. We are delighted and humbled to have put together the 8th edition of the AR Conclave for the entire corporate fraternity and are thankful to everyone who has joined us at the conclave. The Indian annual reports have made the sharpest improvement vis.a.vis. their western counterparts in the last 8 years and AR Conclave and our various research and rating publications have made their own contribution in catalyzing this change.”

He added, “After a successful conclave this year, we will be back with a new set of eclectic speakers and promise to deliver one of the most insightful and interactive conference next year. “

Posted by orientpublication at Tuesday, February 19, 2019
Email ThisBlogThis!Share to TwitterShare to FacebookShare to Pinterest