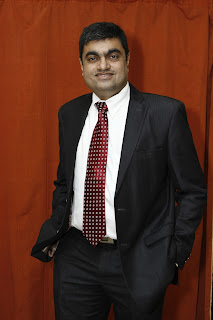 
National, March 21st, 2018: Shemaroo Entertainment Limited, India’s leading content power house has elevated Hiren Gada as the Chief Executive Officer (CEO). Having spent time with various divisions within the company and leading the organization to scale up and get listed, Hiren Gada will now take on the leadership role in addition to his original role as the CFO. In his new role as CEO & CFO, Hiren will chart and lead the firm through its next phase of growth.
Shemaroo has also promoted Kranti Gada as the Chief Operating Officer (COO) of the company.  Kranti had setup the company’s mobile business and played a key role in the company’s early adoption of digital platforms. More recently she incubated the company’s expansion into the DTH segment. In her new role, Kranti will head the revenue function of the company to drive extensive and sustainable growth. Digital media, DTH and International business verticals will now report to her.
With a clear focus on strengthening the organisation for the next phase of development, Jai Maroo - Director of the company will now move from his current role of guiding the expansion of digital media business to focus on organizational transformation & excellence.
Raman Maroo and Atul Maru continue to be the Managing Director and Joint Managing Director of the company respectively.  The new leadership structure will be operational with immediate effect. The restructuring exercise is aimed for the next phase of growth.
Commenting on the management restructuring, Shemaroo’s Managing Director, Raman Maroo said, “Our endeavour has always been to build a future ready organisation with distinct professional capabilities while retaining its entrepreneurial culture. We have done that through an emphasis on developing internal talent and marrying that by bringing in great talent from industry peers. We want to create a structure that will power us as we enter our next growth phase.”
Hiren Gada joined Shemaroo Entertainment 15 years ago and has played a significant role in the transformation of the company from a family run business to a professionally driven organization in terms of systems, processes and best industry practices.
Kranti joined the family business at Shemaroo in 2006 after a successful stint in marketing at Pepsi Co. She helped setup Shemaroo’s mobile business, and established the company as a leading Mobile VAS player of the country.

Posted by orientpublication at Thursday, March 22, 2018
Email ThisBlogThis!Share to TwitterShare to FacebookShare to Pinterest