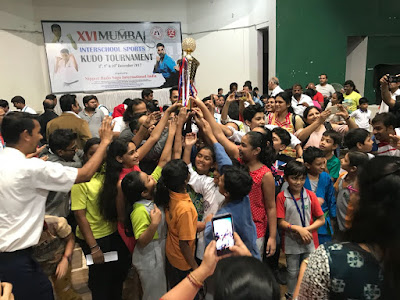 Mumbai, 21 December 2017: Students of Kohinoor International School (KIS) excelled in the 16th edition of Mumbai Interschool Kūdō Tournament 2017 and brought home total 89 medals including 22 gold, 27 silvers and 40 bronzes respectively. The school stood first in the tournament that welcomed 1200 participants from over 100 schools.

Kūdō is a Japanese hybrid martial art. It is full-contact karate with gloves, throwing and grappling techniques are also allowed in the competition, including restraint, locks and strangle holds.

Competitors took part in U – 6 till U – 16 age group. Matches played were squats, kicks, kata, kumita. Maximum gold in kicks total 89 medals out of which 22 gold, 27 silver and 40 bronze.

Speaking on the occasion, Ms. Deepali Nene, Principal – Kohinoor International School said, “To win any award at this event is a very serious achievement, so we are very proud to have won these medals. ‘Nothing is impossible’ is the mantra carried on by each student at KIS. A very well done to all the students who achieved these awards. We thank the parents and coaches for their belief and continued support.”
Posted by orientpublication at Thursday, December 21, 2017