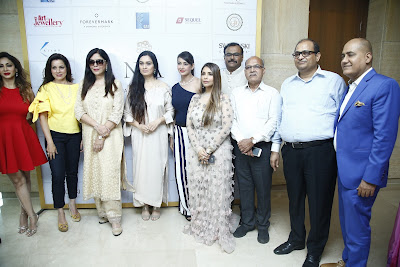 Mumbai, 21st July 2017: The Jury round for the 7th National Jewellery Awards 2017 organized by All India Gems and Jewellery Trade Federation (GJF), was held today in Mumbai. Famous Bollywood celebrities Zeenat Aman, Padmini Kolhapure, Preeti Jhangiani, Shillpi Sharma and fashion designer Falguni (Falguni Shane Peacock) were the judges at the jury round.
Mr. Anantha Padmanaban, Director - GJF and NJA Committee Convener, said,” Today was the last day of the jury round and we were able to have some of the prominent names from the world of bollywood, as a panel of experts as our jury for this year’s awards. All the nominations enrolled for the awards are on display for the jury round. The judges are judging based on the jewellery patterns and designs which are unique and innovative. As organizers, GJF is proud to conduct such awards in the gems and jewellery sector, to encourage the enormous potential we have in the industry.”
He further added, “This year with the help of Ernst & Young, the award process was more stringent and at the same time simple and friendly for applicants. We also made registrations for the awards online this year, as an effort towards digital initiative of Govt of India, to encourage people towards digitalization.”
The National Jewellery Awards comprises of Total 25 Award categories that includes Jewellery Awards 12, Excellence Awards 5, Store Awards 5, Designer Award 2, and Student Awards with a substantial amount as scholarship given to the winning students.  All awards have a timeline and appropriate assessment process wherein each category in order to define the brilliance of the winner in the most adequate procedure that will propel the vital recognition that one accurately earns.

Posted by orientpublication at Saturday, July 22, 2017
Email ThisBlogThis!Share to TwitterShare to FacebookShare to Pinterest