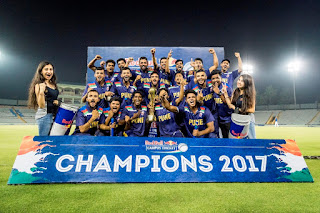 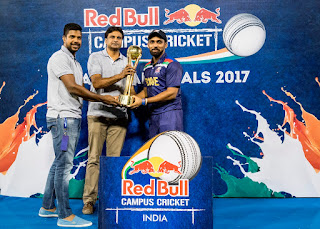 ~ The college team will now represent India in the world finals of this global T20 college cricket tournament in Sri Lanka
~ Marwari College Ranchi, MMCC Pune, Al Falah University Delhi and DAV College Jalandhar battled it out in the semi-finals of the 6th edition of Red Bull Campus Cricket

The semi-final match at Sector 16 on June 2nd witnessed a close game between DAV Jalandhar and Al Falah University Delhi where the former snatched a victory by 2 wicket by chasing the score of 124 with a six in the last ball. Vikram Singh was the man of the match with a knock of 24 runs and 2 wickets.

At the semi-final at the JR Institute of Cricket Technology in Barwala, MMCC Pune, the defending champions, pulled out a confident victory by 33 runs against Marwari College Ranchi with the help of Rohan Damle’s innings of 53 runs in 31 balls and 3 crucial wickets picked up by Sahil Kothari. MMCC put up a massive total of 162 runs which was enough to help them sail into the finals of the 6th edition of Red Bull Campus Cricket National Finals

Red Bull Athlete Varun Aaron said, “There are many tournaments that happen in the county for schools and colleges, but I feel that Red Bull Campus Cricket really invests a lot of resources in their tournament which has helped it grow over the course of 6 years into what it is now. The best of players like KL Rahul & Karun Nair participated in this tournament which gave them the platform to showcase their talent and play at the domestic and national level.”

At the start of the crucial final of Red Bull Campus Cricket National Finals, MMCC Pune won the toss and elected to bat. MMCC Pune set a target of 122 runs for DAV College Jalandhar to chase. DAV Jalandhar gave their best but fell short of 10 runs to the defending champions. With 24 runs from 18 balls and a crucial wicket, Rohan Damle was declared Man of the Match.

Shubham Nagawade, captain of the winning team MMCC Pune “We were confident before the crucial final, the team played well and even though our score wasn’t that high, we gave our best and restricted them to a total of 112 short by 10 runs. The team is elated to win the prestigious T20 tournament and managed to retain the title of Red Bull Campus Cricket 2017 National Finals. We are excited to represent India at the Red Bull campus Cricket World Series Championship 2017 in SriLanka and we are confident to leave a mark at this big stage.

MMCC Pune will now battle it out with teams from multiple countries at the Red Bull Campus Cricket World Series Championship 2017 in Sri Lanka in September 2017.

Bigger and better this year, 170 teams from 26 Indian cities are participating in the annual tournament. The tournament started on February 27th, with the city qualifiers, with the winning team progressing to the zonal/regional playoffs. Two teams from each of the four zones will then compete in the National finals, where the teams will play in the knockout rounds of quarterfinals, semifinals and finals respectively. The winning team from India will then represent the country in the Red Bull Campus Cricket World Series Championship 2017.

Past national winners from India who have gone on to represent the country at the World Championships are Rizvi College, Mumbai; DAV College, Chandigarh; Swami Shraddhanand College, Delhi, and MMC College, Pune.
Posted by orientpublication at Tuesday, June 06, 2017
Email ThisBlogThis!Share to TwitterShare to FacebookShare to Pinterest