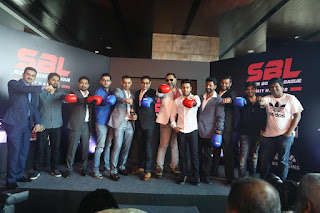 Mumbai, May 8, 2017: The boxing fever is soon to grip India with its first ever Super Boxing League (SBL) to be held in New Delhi from July 7 to August 12, 2017. The league is being organised by British businessman Bill Dosanjh, also the founder and promoter of successful Super Fight League and professional boxing sensation & two-time world champion boxer, Amir Khan.
Eight teams comprising of 96 pugilists will come together for twelve league level matches from July 7-30, 2017 followed by two semi finals on the 5th and 6th August and the grand finale on the 12th August, 2017.
The eight teams of the inaugural edition of SBL are Mumbai Assassins, Delhi Gladiators, Haryana Warriors, Sher-E-Punjab, UP Terminators, North East Tigers, Maratha Yoddhas and Southern Super Kings.
“Today’s event represents a huge step towards delivering our vision of creating an inspirational international level of contact sports in India,” said Bill Dosanjh, Owner & Promoter, Super Boxing League. “Its a great feeling to see a concept taking shape and today we have eight teams with the best of industry partners owning them. I am thankful to all team owners for believing in our vision and joining hands in delivering something which will soon be a symbol of aspiration for many young pugilists across globe.”
The eight teams participating in Super Boxing League are owned by top corporate honchos. Aditya Munjal of Hero Cycles , Arjun Jain of White Fox and Shiva Vij an industrialist from Delhi will jointly own Delhi Gladiators, Nitin Jadhav of Gajanan Oil will own Mumbai Assassins, Jaskaran Puniyani and Navraj Jaura of the Jaura Group will own UP Terminators, Southern Super Kings will be owned by Abhinandan Balasubramaniam who is also the man behind India’s first futsal league, Premier Futsal. Ajeenkya Patil of the DY Patil Group will be owning Maratha Yoddhas, the team that comes from Pune, Amit Aggarwal of S&J Granulate Solutions Pvt. Ltd. will own North East Tigers. Besides these corporate houses, SBL has a team owner who is a farmer by profession but a sport lover by passion. Karan Devgan comes on board as the owner of Haryana Warriors.
Speaking at the occasion, professional boxer and promoter of SBL, Amir Khan said, “Long-term partnerships work best for both the brand and the team, where they draw from each other’s vigour. SBL is going to be a big leap in the history of boxing and I am confident that it will become one of the most coveted title in boxing in the years to come.”
Each team at the Super Boxing League will have a squad strength of 12 boxers, including six back up boxers. A team will have a mix of five male and one female boxer and can have a maximum of three international boxers. Each action-packed weekend of SBL will see the best of 6 bouts formats across six weight categories. A bout will have 4 rounds of 3 minutes each.
SBL has roped in Sony Pictures Networks India as the broadcast partner for on-air as well as online streaming of the league. The league will be telecasted live on SONY ESPN and SONY ESPN HD at the prime time slot of 7-9:30pm over Friday, Saturday and Sunday and will be live streamed on SONY LIV.
The schedule of the matches is available on the website of Super Boxing League. For more information, please visit, www.superboxingleague.com.
Posted by orientpublication at Tuesday, May 09, 2017
Email ThisBlogThis!Share to TwitterShare to FacebookShare to Pinterest