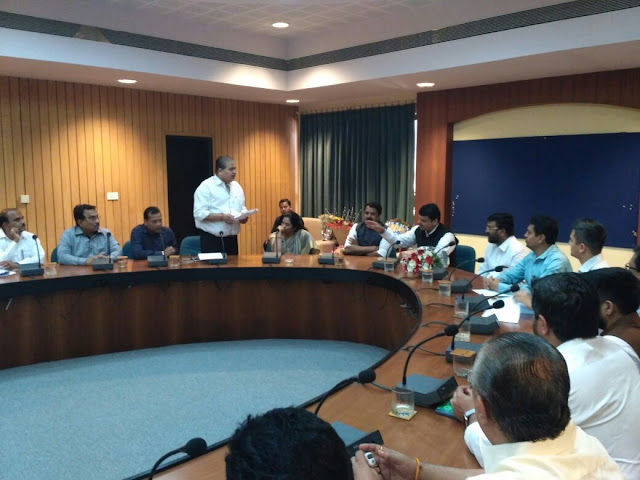 The chamber President Shri Ashit Shah presented several points major of which was (A) ULC MATTER and several issues faced by Developers in that regard. It is to be noted that ULC was scrapped by State govt of Maharashtra in 2007 (B)Faster approval process and ease of doing business with urban development secretary looking into the matter (C)NA permission process to be simplified (D) Redevelopment policy to be formulated for the region.

HON CM Shri Devendra Fadnavis said "I have taken serious cognisance of the issues & suggestions, promising a positive action resulting in quick conclusion to especially in the ULC MATTER. Regarding NA, we are certain that the process will be simplified greatly. Talking on faster approvals, the UD Secretary will look into it and make necessary changes.On redevelopment policy front, we are working on the same as it is effective to public at large and we will come up with a better outcome soon. I assure the CREDAI-MCHI Mira-Virar Unit that the government in action is committed to faster development and support to ethical businesses. We will look into each matter closely and follow through."

Tejas Vyas, Secretary CREDAI-MCHI, Mira-Virar City Unit stated, “We are thankful to the Chief Minister for hearing out our suggestions and issues. He has also given us an assurance that he will get positive outcome in all our pending issues. The major issues that we face are ULC, NA permission faster approvals and redevelopment policy. CM has also promised us that under his good office and government, the business fraternity can do ethical business fearlessly. We are very happy with his positive outlook.”


Posted by orientpublication at Friday, January 27, 2017
Email ThisBlogThis!Share to TwitterShare to FacebookShare to Pinterest