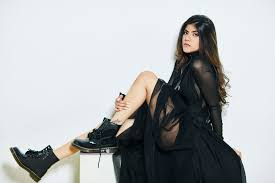 LAUNCHED AMIDST AN EVENING OF SPECTACULAR ENTERTAINMENT, ANANYA DELIVERS HER FIRST LIVE PERFORMANCE

Ananya Birla, well-known in India as a leading innovator enters a new phase of her life as she launches her debut International single “Livin’ the life”. The 22-year old has been exclusively signed by leading record label, Universal Music Group. The major has launched Ananya’s musical career with the release of the single “Livin’ the life” now available globally through its network.
At a glittering evening in Mumbai on Saturday, Ananya Birla’s single was launched amidst a host of celebrities and some exciting entertainment! Featuring Illusionists, street dancers and even a sand artist, Ananya Birla made her sensational debut performance on stage, belting out her single “Livin’ the Life”.

Says ANANYA “With Livin’ the life, I am following my dream. I’ve always loved music, and making music. The song is about finding who you are, because I believe that only by doing that, will you find happiness. For me I discovered I needed to try to spread love to others. For other people it might mean something else – playing football or looking at the sea. I believe that if you discover who you are really are, you can overcome any challenge.”

With love for music since childhood, Ananya has been inspired by a number of International artists such as Ed Sheeran, The Fray, Cheryl Cole, Eminem, AR Rahman and Coldplay. Her debut single “Livin’ the life” features a strong point of view for those who walk through life seeking their own true path. The song demonstrates Ananya’s drive, creativity, passion to help others overcome challenges. Her hope is that its heart-felt lyrics, melodies and dance-inducing rhythms, will inspire the same spirit of self-realization among listeners.

The music video of the song, shot on the beautiful Santa Catalina Island in California, is equally inspiring as it showcases a visual representation of the song’s impactful theme. The video is directed by international director ROCK JACOBS whose previous work includes music videos for Skrillex, Marilyn Manson, Lil Wayne, The Game, Ice Cube, The Vamps, J Cole, Iyaz and Rick Ross.
Ananya Birla’s debut International single “Livin’ the life” is now available worldwide across digital platforms exclusively on Universal Music Group.
Posted by orientpublication at Sunday, November 13, 2016
Email ThisBlogThis!Share to TwitterShare to FacebookShare to Pinterest