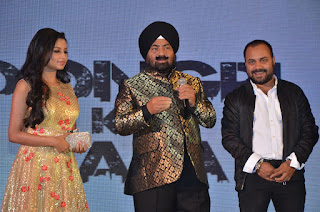 The trailer of Dongri Ka Raja was launched   with great fanfare amidst the  media at Mumbai's JW Mariott, Juhu.
Exploring the seedy underbelly of Dongri, that it is popularly known for, the launch  introduced  two new faces - Gashmeer Mahajani and Reecha Sinha -   the lead pair of  the film.
Joining them on the dias were actors Ronit Roy, Sachin Suvarna and Ashmit Patel, along with director Hadi Ali Abrar, who shared anecdotes on what made this  film so memorable and special   for them.
Director Hadi Ali Abrar said, "Through this  film we want to say that love is omnipresent and can transform the life of the most hardened criminal. "
Marking the debut of Filmy Keeda Productions Pvt Ltd, pharmacy corporate baron of Torque and now  producer, PS Chhatwal said that he had not stepped into show business for the money. "Our sole purpose is to change people's lives," he emphasised that his production would make only quality cinema.
After a successful stint  with products of healthcare solutions that had renowned celebrities like Parineeti Chopra, Pulkit Samrat, Kailash Kher and ghazal maestro the late Jagjit Singh as its brand ambassadors, Chhatwal said that his  corporate houses leap into films was a natural progressive move.
Posted by orientpublication at Friday, October 14, 2016
Email ThisBlogThis!Share to TwitterShare to FacebookShare to Pinterest