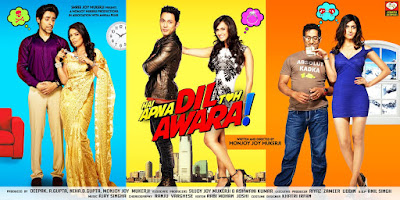 The House of Mukerjis initiated by the legend of Hindi Cinema, Shri.Sasadhar Mukerji has been the fountain of various talents in the industry till date including Actors as well as Filmmakers. His son Joy Mukerji as a superhit romantic hero is etched in our hearts forever as he has left a lasting impact with his numerous superhit romantic movies like Love In Shimla, Phir Wohi Dil Laya Hoon, Love In Tokyo, Door Ki Aawaz, Aao Pyar Karen, Shagird,Ek Musafir Ek Haseena,Ishaara to name a few. Now, it’s the turn of Joy Mukerji’s son,Monjoy Mukerji  who has an intense passion for filmmaking and with the blessings of his late father  is bringing a new dimension to Indian cinema with his debut film ” Hai Apna Dil Toh Awara”.

Hai Apna Dil Toh Awara(H.A.D.T.A) film tries to explore the complex world of relationships between a man and a woman as Monjoy draws inspiration from real life situations of his friends and acquaintances to understand how two lovers can commit themselves to each other for the rest of their lives !  Hai Apna Dil Toh Awara is a musical rom-com which promises to be great fun for the entire family Written and Directed by Monjoy Mukerji as he revives Joy Mukerji’s banner, Produced by Deepak . R.Gupta and Neha. D.Gupta, Monjoy Joy Mukerji, Music  and Background score is by Ajay Singha & D.O.P is  Anil Singh. Joy Mukerji’s second son Sujoy Joy Mukerji is the Associate Producer along with Ashwani Kumar. So, friends are you excited to watch  Hai Apna Dil Toh Awara as it releases at a theatre near you on 5th August, 2016.

Hai Apna Dil Toh Awara is a slice of life in the lives of three couples who have their own point of views about life and when their thoughts collide, it’s a Bull vs Matador fight to the finish for them.
Living life in the metro city can be stressful, expensive and confused.
One is often finding himself from room to room. From a match box size apartment to a bigger case apartment.
Tony Singh,( Sahil Anand ) who is a perfect con artist when it comes to women has his lady love Pooja Mehta( Niyati Joshi ) in a web of dreams around him.
Rikki Dalwani’s (Vikram Kochhar) life is a beach resort where he has this perfect wife Sanya Dalwani( Divya Choksey) doing all the things,  from house hold work to running their boutique and he seems to be engrossed playing a game of monopoly with his friends.
Saajan Patel( Nilesh Lalwani ) and Sanjana Patel’s( Jayaka Yagnik ) life is  straight from the tales of a gujrati  household stories where the man is stuck between his mother’s love and his duties towards the wife when ever the two women of his heart confront each other in the Kitchen, which is a battle ring in the house.

Having said this and giving and taking nothing from these bright couples, the story moves towards a plan that Pooja  decides to have for her man Tony, a dream getaway destination to Kashmir to spend more quality time with her man in order to move to the next level of their relationship, that is marriage ( every woman’s dream and a man’s nightmare )They seem to be stuck on level one   since past two years.
But Tony seems to be in a party mode and  extends the invitation to his friends and their wives Utterly to Pooja’s dismay. The other two couples love the idea and decides to join Tony and Pooja.

The  fresh air and the picturistic view of Kashmir totally mesmerized the three couples and love seems to be on the menu for all of them.  Meeting their oldfriend Manjeet Singh Sodhi ( Herry Tangiri ) the resort owner and his beautiful Persian wife Sonya Singh ( Sareh Far ) is a delight for all of them.

The sudden shift of gear in their lives seems to clearing the air of confusion and ego among the three couples.  What follows next are a series of events in their lives that makes them realize that how precious  their lives are and the importance of love among them which seemed to have been lost in the chaotic city of Mumbai
Posted by orientpublication at Thursday, July 07, 2016
Email ThisBlogThis!Share to TwitterShare to FacebookShare to Pinterest