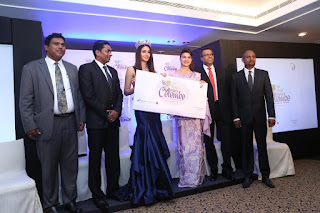 The two nights, three days Colombo package, is priced at a mere INR 19,999/- (inclusive of airfare, transfers and full board accommodation). Travellers can avail of this package from Bengaluru, Chennai, Cochin, Trivandrum, Madurai, Kolkata, Mumbai and Delhi. The offer has been introduced as a first of many promotional strategies aimed at increasing the number of Indian tourists to Sri Lanka.

Offering Indian travellers looking for a short break; a chance to shop, explore and party in style, the package will redefine the Colombo holiday experience.

Addressing the press conference held at Trident Hotel, Mumbai Mr. Rohan Karr, Executive Vice President, John Keells Holdings and Sector Head – City Hotels at Cinnamon Hotels & Resorts said, “The Indian travellers form a major part of the tourism industry in this region today. However, at present only a mere fraction of Indian outbound tourists travel to Sri Lanka on holiday.  Majority of the Indian travellers are yet to discover the hidden wonder of Sri Lanka which is right next door. Cinnamon Hotels &  Resorts in collaboration with Sri Lankan Holidays are delighted to introduce this neat little holiday package filled with shopping, partying, exploring and dining options - for an incomparable opportunity to discover Colombo.
We at Cinnamon Hotels and Resorts are well aware that the Indian market will continue to contribute towards the success of Sri Lanka’s tourism going forward.  The Colombo package offered by Cinnamon Lakeside will play a major role in this endeavour.  I am confident that the people who will visit Colombo on this package will enjoy an unparalleled Cinnamon experience.”

SriLankan Airlines Chief Commercial Officer, Mr. Siva Ramachandran added, “With the long standing affinity between Srilankan Holidays and Cinnamon Hotels & Resorts, we are pleased to be part of this endeavor. India has been one of our vital markets where we constantly explore the potential for expansion. For the last two years, India has remained the top most market for tourists arriving in Sri Lanka. This, together with our convenient and seamless connectivity from seven key Indian cities to Colombo, SriLankan will continue to support any endeavor which will enhance the tourism inflow further.”

India till date ranks first in tourist arrivals for Sri Lanka. Both, Cinnamon Lakeside Colombo and Sri Lankan Airlines believe that this package makes for a great opportunity for Indians to explore the capital city of the emerald island.

Cinnamon Hotels & Resorts, celebrate the best of contemporary Sri Lanka with 14 hotels strewn across the island and in the Maldives. Cinnamon’s city portfolio has three diverse properties, each showcasing unique characteristics. Cinnamon Grand is the benchmarked award winning five-star city hotel of the industry, while Cinnamon Red introduced a brand new concept of lean luxury to this region.  The urban getaway, Cinnamon Lakeside, is the premier five- star resort in the city and is the perfect location for a unique experience.

Log on to: www.seeshopparty.com or call 1800 419 0458 for more details on the itinerary.
Posted by orientpublication at Friday, February 19, 2016
Email ThisBlogThis!Share to TwitterShare to FacebookShare to Pinterest