Rickshaw’s lookalike will be sported by the Thai contestant 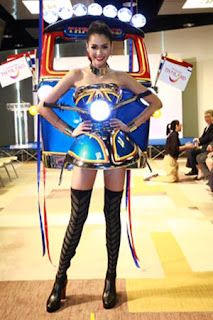 Mumbai, 17 December, 2015 – The Tourism Authority of Thailand (TAT) announced another step in elevating ‘Discover Thainess’ to the next level, as the Tuk-Tuk, one of Thailand’s most iconic and playful symbols, will take centre stage at Miss Universe 2015 in Las Vegas, Nevada, USA. Representing a new dimension of modern-day Thailand, the promotion of the beloved three-wheel auto rickshaw is designed to help boost the kingdom’s image, while underlining the charm of the Thai hospitality and tourism industry among millions of viewers of the world’s biggest beauty pageant.
To be worn by Miss Universe Thailand 2015, Ms. Aniporn Chalermburanawong, during the preliminary round, the Tuk-Tuk Thailand national costume – taking inspiration from bustling Thai streets, and eye-catching pop culture in a smile-inducing winning design entry masterfully created by Mr. Hirankrit Pattaraboriboonkul – is unlike any other and incorporates engineering precision, 3D imaging technology, and high fashion couture craftsmanship.
Mr. Yuthasak Supasorn, TAT Governor expressed that, “The Tuk-Tuk – a truly unique attribute of Thailand – will be admired by millions. The Miss Universe 2015 pageant is definitely a stage that will help connect Thailand to discerning travellers from every corner of the world, and there’s no tourism ambassador more suited to carrying Thai tourism goodwill messages than our Tuk-Tuk. We are confident that Miss Universe Thailand 2015, Ms. Aniporn Chalermburanawong, along with the playful national costume will capture hearts worldwide, with Siamese smiles and Thai hospitality.”
Voted one of the Top 5 Taxis in major metropolitan cities across the world in a survey conducted by hotels.com in 2010, Thailand’s iconic means of transportation are a vehicle of choice for local residents and those visiting Thailand alike.

Posted by orientpublication at Friday, December 18, 2015
Email ThisBlogThis!Share to TwitterShare to FacebookShare to Pinterest