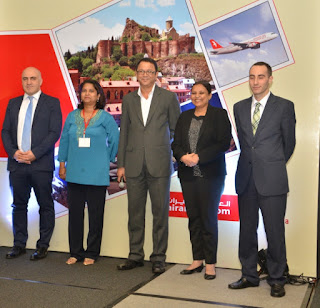 Mumbai, 5th Nov, 2015:- Air Arabia, the first and largest low-cost carrier (LCC) in the Middle East and North Africa – in a significant move recently organized a road show in Delhi and Mumbai in association with Georgian National Tourism Administration. The road show proved to be an excellent opportunity to explore the diverse aspects of Air Arabia as well as Georgia‘s tourism offerings.

Air Arabia and Georgian National Tourism Administration hosted the road shows in Delhi on 29th October, 2015 (Thursday) and Mumbai on 30th October, 2015 (Friday) in order to foster and develop a closer working relationship with key members of the travel industry. The purpose of the road show was to promote both the airline and the destination's tourism offerings.

Mr. Sachin Nene, Regional Manager - India, Air Arabia and Mr. George Chogovadze, Head of the Georgian National Tourism Administration were present in the road show. The show was based on a thorough presentation of Air Arabia and Georgian National Tourism Administration.
Georgia has witnessed 81% growth in Indian tourists visiting the country during the first nine months of 2015 (January-September) as compared to the same period last year, said a top official of the Georgian National Tourism Administration. A country in the Caucasus region of Eurasia, Georgia is home to Caucasus Mountain villages and Black Sea beaches.
"Georgia is still lesser known in the Indian market and we are creating awareness about the destination and its offerings through roadshows and by meeting travel trade in the country," said Mr. George Chogovadze, Head of Georgian National Tourism Administration (GNTA).
GNTA is now focusing on its offerings such as ski resorts, wine events and wellness and spa resorts to attract Indian travellers, especially the Meetings Incentives Conference & Exhibitions (MICE) business.
Air Arabia, the Middle East and North Africa’s first and largest low-cost carrier, began regular direct services to Tbilisi, Georgia, from October 28, 2014. Tbilisi is Air Arabia’s 100th global destination. The capital and largest city of Georgia, Tbilisi, located in the beautiful Caucasus Mountains, is home to 1.5 million people. An increasingly popular tourism destination, the city

is the social and economic centre of Georgia. The country has a vibrant history and, due to its location at the crossroads of Eastern Europe and Western Asia, offers a rich tapestry of different cultures brought together under a single flag over the last millennium.

Air Arabia started operations in India in 2005 and now flies to 13 cities in India which includes Jaipur, Kochi, Nagpur, Coimbatore, Thiruvananthapuram, Goa, Kozhikode, Hyderabad, New Delhi, Mumbai, Bangalore, Ahmedabad, and Chennai – offering the perfect blend of connectivity from not just the smaller towns, but also from metros and Tier 1 cities across the length and breadth of the country. It operates over 112 weekly flights from its hub in Sharjah to the thirteen cities in India.

Air Arabia has a fleet of new Airbus A320 aircraft with a 32 inch seat pitch, which gives the best leg room of any economy class travel. The airline also provides visa assistance to passengers from India. With Air Arabia Holidays, the airline offers attractive packages to a wide range of international holiday destinations.

Over the years, the airline has posted steady growth and driven significant value to its customer base across India, with its philosophy of offering value for money and greater connectivity to the UAE and beyond.
Posted by orientpublication at Thursday, November 05, 2015
Email ThisBlogThis!Share to TwitterShare to FacebookShare to Pinterest