Thailand reaches out to producers; keen to have Bollywood shoot against Thai backdrops 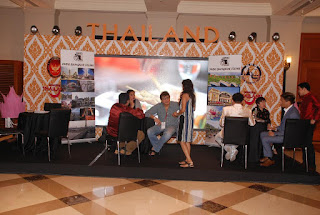 Mumbai, 21 October 2015: The Tourism Authority of Thailand in Mumbai has partnered with Cinema Tourism Summit (CTS) in its 2015 edition in order to showcase the destination to Bollywood film producers.
TAT Mumbai also roped in Thai attraction Siam Niramit to invest in impressing local film-makers through a 10-member delegation of performers to the CTS Awards Evening which was hosted by TAT Mumbai and  therefore themed Thai Night. A full sensory experience was delivered: umbrella paintings, flower arrangements and traditionally crafted fruit carvings formed the perfect backdrop to the networking session and some of the dance performances. And an authentic Thai culinary spread took delegates straight to Thailand.
The audience was mesmerized by performances depicting the battle between Ram and Ravana (who are heroes, not just in our own mythology but also in Thailand’s) complete with breath-taking costumes and seemingly impossible traditionally Thai dance moves.
Soraya Homchuen, director of the TAT office in Mumbai illustrated the beautiful locations and experiences that offer dramatic backdrops to Bollywood’s riveting tales.
After the film, Mukesh Bhatt one of India’s premier film-makers, calling the video w ‘enchanting’ said, “I must congratulate the hosts of Thai Night for the amazing audio visual experience we just saw. Indian states too could take a cue from it – this is the kind of mesmerizing visuals that will attract film-makers to a destination.”
The deputy Consul General of Thailand, Ms Sirin Surathin said, “Recent films shot in Thailand include Houseful 2 which was shot in Krabi and Student Of The Year which was shot in Samui, Bangkok & Krabi. Additionally, All Is Well, starring Abhishek Bachchan showcased many parts of Thailand. From our understanding, Indian film-makers flock to Thailand because production costs remain lower in Thailand as compared to most traditional as well as upcoming film-location destinations.” She added that the popular destination’s authorities are open to the idea and very supportive because they recognize that films “act as a virtual holiday brochure.”

Posted by orientpublication at Friday, October 23, 2015
Email ThisBlogThis!Share to TwitterShare to FacebookShare to Pinterest